Political vigilante groups must be stopped off pronto 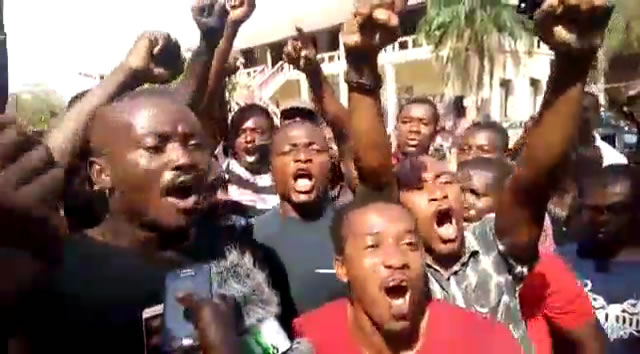 Pathetic in our permissive nation, is the escalating frequency and intensity with which some stubborn citizens disregard the country’s constitution and resort to acts of gruesome violence and anarchy.

Every blessed day, we are slapped right in the face by stories of some bunch of miscreants flouting rules, setting state properties ablaze which are worth millions of cedis and also embarking on violent demonstrations. These acts of violence are mostly executed by political vigilante groups in Ghana. I wish to state on the record that almost the administrations of the two major political parties in Ghana have been characterized by some traits of violence by these political vigilante groups.

Previous administrations have woefully failed in an attempt to curb the act of political vigilantism. The NDC failed in an attempt to inject sanity in the nation with regards to this matter at stake. I am convinced to take solace in the old adage that “one should never bite the hand that feeds you; knowing very well that you will be hungry again.”

I dare say that the current proliferation of political Vigilante Groups has now metamorphosed into an indescribable situation. It has really taken on a new phase and a new dimension. All hell is broken loose through the display of sheer madness by these Vigilante Groups.

This year has seen the acts of violence through the actions and deeds of the Delta Force which is considered as an invincible force of the New Patriotic Party.  We cannot overlook the mass destruction of state properties by some citizens of Somanya who were not happy about a light bill issued by the VRA. The punishment meted out to these miscreants was considered as extreme justice by some romantic political analysts in the country. But I beg to differ. That could not deter other Vigilante Groups from doing same.

Admittedly, the president of the republic of Ghana has publicly condemned the acts of violence by these Political Vigilante Groups but this lingering canker still continues unabated.  This year has recorded about 20 acts of violence spearheaded by the various Vigilante Groups of the NPP. It is high time we stopped romanticizing this issue and think of the ramifications of their deviant behaviour.

Earlier this year, Mr. David Asante, the Inspector General of Police is on record to have promised the whole nation that the police would deal mercilessly with people who engaged in any form of violence in the name of Political Vigilantism. The general populace was assured that it was the last time the people will hear of these blackguards. With these heart-warming words from the IGP, the citizens were rest assured that the Police Department will leave no stone unturned in combating this menace.

It is very unfortunate that history has repeated itself under the auspices of the one who made this promise that never will it happen again. Sincerely, these Vigilante Groups, through their deviant deeds have seen the Police as just rendering lip service and empty threats. In the mind of these Vigilante Groups, the Police Department has no venom to bite. After all, they will be granted bail when they are arrested by the Police.

The most recent and horrifying act of violence that has really agitated the minds of many a Ghanaian is the bizzare behaviour by some apoplectic youth of karaga in the Northern Region of Ghana as they invaded a police station to free some members of the NPP who were in custody. The “Burma Camp” Vigilante group which is in the Northern Region can also not be tamed. This display of lawlessness by these Vigilante Groups has really sent shivers down the spine of many Ghanaians. It seems the government has no control over this crucial matter.

I wish to state that I am not writing this piece as a stalwart of any political party neither am I using this piece as a cynical ploy to be recognized as a kingpin in the world of writing. But as a concerned citizen, I see this act of political vigilantism not only nauseating but also a threat to our hard-won reputation as a nation. Yes! There are black-sheep in every administration but if these black-sheep are not tamed, then they will gradually metamorphose into some weird beasts. The Vigilante Groups might have helped to rocket the party into the realms of government.

But the hard truth is that, these acts of violence, if not carefully curtailed, have the tendency of overshadowing the good deeds of the Nana Addo led administration. When the chips are down, if care is not taken, this government would be remembered as an administration that was characterized by atrocities and notoriety.

This state of lawlessness is really taking its toll on the New Patriotic Party and the nation as a whole and we can no longer entertain any romantic promises to soothe our fury and fears. This current administration, having been in opposition for some number of years should know better that Ghanaians are never impressed with efforts but results. These acts of violence should be stopped even if it is going to cost someone his or her job.

The Police Department should be on their toes and put punitive measures in place in order to deal with this canker. Preventive measures should be adopted to radically reduce the levels of political vigilantism which will save us the precious time of releasing speeches of hope and assurance anytime these miscreants strike. If stopping these Vigilante Groups by the Police Department is like banging one’s head against a brick wall, then they should be made to join forces with the Ghana Armed Forces to eradicate this canker forthwith.

Having said that, it should be noted that all hands should be on deck for us to be able to clip the wings of political Vigilante Groups in Ghana.

Ghana, our home, our pride.