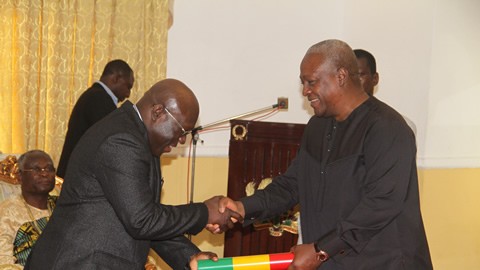 Folks, President Mahama is reported to have introduced an innovative approach toward managing the process for recruitment and dismissal of persons to public office. And as is to be expected, those who have positioned themselves to see nothing good coming from him have jumped on him to condemn. I see nothing wrong with what the President has initiated. First, the news report, then, my comments.

Sources attributed to The Informer newspaper have revealed that President Mahama has warned all appointees of his government, particularly, those working at the seat of government (Flagstaff House) that with the on-going reshuffle that he is conducting, no appointee is safe from being fired. In letters said to have been signed by the President himself and given to the appointees, including the Chief of Staff (Prosper Bani) and other senior presidential advisers and aides, President Mahama thanked them for their services rendered to his government and to the nation.

The message is clear: that instead of rushing to cause radio announcements to be made to “shock” the appointees, the President has chosen to communicate with them beforehand and to help them do self-appraisal even before his axe falls.

The truth is that appointments to offices are preceded by consultations. If so, why can’t removal from office also be taken through similar paths of civility? By informing the appointee who falls short of an upcoming re-organization of his team, the President isn’t setting the stage for any free-for-all situation to disrupt governance or his own administration but to ensure that even if some of the appointees are no longer needed at the Presidency (or wherever else), they are not being cut off and sent out as pariahs. They can still serve society in other capacities, which must be recognized and supported.

His critics see things differently and are flooding public discourse with their scathing criticisms as if what he has done is sacrilegious. One such critic is Dr. Evans Aggrey Darko (a political science lecturer at the University of Ghana) who made a number of observations:

Others have also made utterances to suggest that President Mahama’s approach is impolitic or administratively wrong. The NPP’s Sammy Awuku (National Youth Organizer) turned his criticism into a childish display of imbecility and doesn’t warrant any critical comment. Just consider what he said: It will be of a great interest to many Ghanaians if President John Mahama rather evacuates the seat of government rather than his appointees in an attempt to restructure his government. Such low-brow and lousy comments from political neophytes in this NPP cabal expose their frustration and need no head-

The real substance that one needs to raise here is that President Mahama did nothing wrong to undermine his administration or create panic among the staff. All he has done is to alert them to the fact that he is gearing up to re-organize his team. It is better to step on their toes now than to keep them in the dark and dismiss them by radio announcement.

Ghanaians are used to such ill-tempered approaches to governance by which public servants, especially those appointed to office by the President, are discarded through radio announcements as if they are Ghana’s worst enemies. They are not and should be treated humanely, even when their services are no more needed.

The truth is that the appointing authority has often not used civilized means to dispense of appointees, which is not characteristic of democracy. Of course, under Nkrumah, the practice was well entrenched to such an extent that it became a common knowledge that most public servants or political appointees (especially the high-ranking ones) would always be wary of the “One o’clock” news hour. That was the time when wanton dismissals were announced without any prior information being conveyed to the victim. Thus, government functionaries were always on tenterhooks.

Succeeding leaders of this country followed suit. Under Rawlings, for instance, the practice was well known and can be cited as one major factor that annoyed the victims and killed their public spiritedness. I remember very well the case of Emmanuel Acquaah-Harrison, who was one time the Eastern Regional Secretary and invited as the Guest of Honour during the celebration of the annual festival by the chiefs and people of the Somanya area (Odumasi Krobo). He left Koforidua in the evening of Friday to be present at the function the following day but his spirits were dampened when by a radio announcement, he was removed from office. No one knew how he left the Somanya area and fell into oblivion thereafter.

Another appointee, suffered a similar but more devastating fate. That was a PNDC District Secretary for the Sekyere area in Ashanti Region (in those days) who was dismissed by a radio announcement that said that he was being dismissed because of “mental exhaustion”. No one knew what that charge was.

A careful observer of the situation under Rawlings will know that many former appointees of Rawlings defected to the opposition political parties, citing the brusqueness with which they were treated under or by Rawlings as a factor. The late Salifu Bawa Dy-Yaka and B.A. Fuseini are good examples. Many others who felt not properly treated can tell their own stories.

Under Kufuor, the practice persisted. Take, for instance, Kufuor’s dismissal of Francis Poku from office as the Minister of National Security after an altercation at Kufuor’s residence when Poku stood his grounds and Kufuor found him to be grossly unrepentant and unapologetic by not accepting his guilt for going behind Kufuor to arrogate power to himself and to act accordingly, which was an affront to Kufuor’s power and authority.

Even though Kufuor openly told Francis Poku “Fri me fie” (“Get out of my house!!”), the official announcement dismissing Poku from office came that evening through a radio announcement. Those of us monitoring the situation at the time knew the extent to which the fracas negatively affected the Kufuor administration and how Francis Poku outwitted the system to land in Britain, where he has been since then.

Under President Mills, the practice existed. How was Martin Amidu, for instance, removed from office? Under President Mahama, the practice has obtained to date. Dismissing appointees by radio announcement has become so entrenched as to seem the fait accompli, which is why the innovative approach now being introduced by President Mahama seems to have “shocked” his critics and ruffled their feathers. They are not in the least prepared to see anything new being introduced to make the relationship between the appointing authority and the appointees more genial and civilized. They are more wont to accept the crude method of getting rid of appointees than appreciating the civility that President Mahama’s approach entails.

Now, it must be laid bare here that the reasons being given by the critics are porous and inadmissible. By alerting them to what he has up his sleeves, President Mahama is only ensuring that they put their small houses in order even before his clout falls. Those who know why they are in office and have been doing well won’t lose any sleep or bat an eyelid over the contents of the letter from the President. They will stand out to be counted.

Those who have under-performed know themselves and should brace up for the axe. There will be some panic; yes! But that panic isn’t likely to last for long or tempt the staff members to begin intensive lobbying or doing acts to lower productivity. Anybody who does so will be quickly noticed and dealt with even before the dust settles on the announcement.

Ghanaians are too quick to see innovations as threats. The status quo ante has its merits and demerits. In this case, the practice whereby appointees are kept in the dark about their service only to be kicked out when least expected is backward and must be discarded. That is why President Mahama’s innovative approach should be properly assessed and welcomed as a more cordial way of establishing working relationships.

Let us remember that there is nothing more honourable and rewarding than one’s being recognized as a team member and being approached to serve in government. Because we are human beings to whom perfection is not a quality, we expect that not all appointees can perform without question. And human beings should be intelligent enough to have benchmarks by which to measure performance such that if one falls short of the mark, one needn’t be dehumanized but rather gently told of the shortcomings and asked to step aside for others to step in. Doing so calls for civility, not a mere show of power. I am certain that what President Mahama has set in motion is geared toward injecting civility into the machinery for governance.

The familiar experience, however, is that once those appointees are kicked out, they lose face as a result of the negative impression that is created by the radio announcement. We must put an end to this sordid way of handling public service. That is what undergirds President Mahama’s style and those criticizing him seem to be doing overtime to find fault where there is none.

I am tempted to conclude that if this approach is streamlined and used properly, it will ensure better working relationships and make appointments and dismissal from public service more cultured and beneficial to society. Those called up to serve the country will not harbour ill-feelings when no more needed because the approach toward identifying, recruiting, and dispensing of their services would be shaped and shaved by discipline, respect, morality, and conscionable dispositions; not by enmity, rancour, and bitterness as has been the case hitherto.

No single Ghanaian can claim to love Ghana more than any other Ghanaian. We are all citizens and serve the country in one way or the other. That is why it must be made clear that although the President is the fount of authority, he cannot rule Ghana alone and must rely on others in positions of trust, supported by the citizenry. It is, therefore, imperative that the procedures for appointing and dismissing people from office should be devoid of acrimony.

The President is in office by virtue of the mandate given him at the polls. His appointees may be at his beck and call but ultimately, all will account for their stewardship. That is why it behooves the appointing authority to devise civilized means to deal with the appointees so service to one’s country doesn’t become a tug of war. Public service is no battle ground. That is what President Mahama’s approach entails. More grease to President Mahama’s elbow, then.