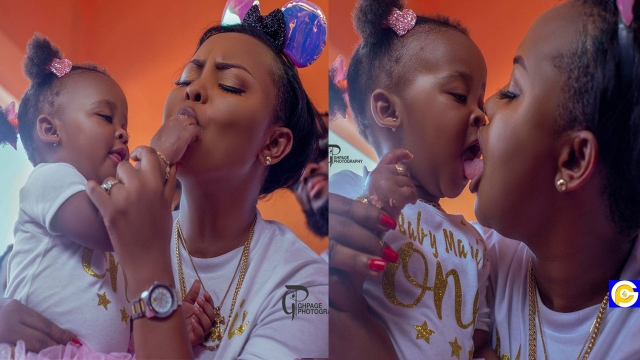 A viral video of actress Nana Ama McBrown putting her tongue in her daughter’s mouth has been criticised by pundits on US television station.

Pundits on FOX 5’s ‘Like it or Not’ thought the movie producer went too far with her show of affection to daughter, Maxin, on her first birthday.

On a recent episode of the show, which provides commentary on controversial topics, the pundits felt Nana Ama McBrown’s show of affection was unconventional.

“I don’t want to see it. I don’t like it. Look, I don’t wanna judge another parent, but I will never do that to my child…this is going too far. You can show affection in a lot of different ways and that for me was over the line,” one of the pundits is heard saying in a viral video of the discussion.

Another pundit said, “It’s hard to watch…I understand that she loves her daughter but I just feel it is a little too much.”

Before the discussion on the US TV station, the video of the actress licking off bits of cake on her daughter’s hand and offering her daughter her tongue to kiss had generated a heated debate in Ghana.

While some thought there was nothing wrong for a mother to put her tongue in her child’s mouth, others said it was repulsive.

DISCLAIMER: The Views, Comments, Opinions, Contributions and Statements made by Readers and Contributors on this platform do not necessarily represent the views or policy of Multimedia Group Limited.
Tags:
Nana Ama McBrown