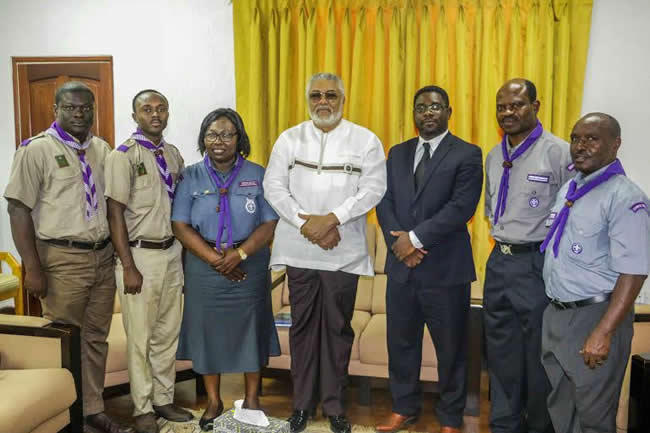 Ghana’s former President, Flt Lt Jerry John Rawlings, has invited corporate institutions to invest in the growth and expansion of youth organisations such as the Boy Scouts because of their positive impact on society and country.

He said the youth need mentorship because the complex global environment they find themselves in makes it difficult for them to stay focused and the Scout Movement “virtually takes you to the height of coming to terms with the value of your humanity. That humanity means nothing if it is not shared.”

President Rawlings, who spoke at a meeting with a delegation from the Scout Movement, led by Jemima Nartey, Vice-Chairperson of the World Scout Committee and Frederic Tutu Kama-Kama, Regional Director of the World Scout Bureau, at his office in Accra on Tuesday, said though he ended up in the military, the values he had imbibed as a Boy Scout and under the mentorship of his brother, the late Isaac Newton Addy helped to shape him.

“It is a wonder,” Flt Lt Rawlings stated, “that the Scout Movement had survived through the trying times that we’ve been through.” He expressed his gratitude to some members of the older generation and the current “who know what scouting stands for and what it does for the youth as one of the most valid and proficient mentorship voluntary organisations I have ever come across.

“The values of the Scout Movement, is what we need for the youth anywhere and everywhere. I am saying so because it’s holistic. It just doesn’t deal with one aspect of our living situation. The scout is whole and at the centre of it is the desire to sacrifice, to provide for, and to live for.

“It’s unfortunate some people haven’t experienced this kind of discipline that some of us have had the fortune of experiencing. We need it badly. If the world needs anything now than ever it’s the values that we imbibe into the youth through organisations like the Scout Movement,” the former President said.

President Rawlings accepted an invitation from the delegation to attend the World Scout Foundation meeting in Kampala in August.

The delegation sought the former President’s influence in raising support for the scout foundation’s activities. They also informed him of their intention to honour his brother, the late Isaac Newton Addy for his immense contributions to the scout community. Until his demise last November, Mr. Addy who was the Ghana Chief Commissioner for years was the Vice-Chairman of the Scout Foundation.

Mr. Kama-Kama stated that the Scout Movement was keen to perpetuate the memory of the departed one because he was an inspiration to all.

Emmanuel Nii Dodoo Addy, son of Isaac Newton Addy expressed gratitude to the delegation for the honour done to his father.