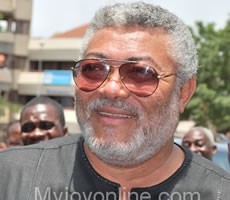 The attention of the Office of President Rawlings has been drawn to an incident at the gate to the office on the morning of Tuesday, January 17, 2011 involving security personnel stationed at the gate and occupants of a private vehicle that attempted to make a turn at the gate.

Our investigations have indicated that the security officer in his bid to direct the occupants of the vehicle to take the appropriate turn rather involved them in a violent altercation during which one of the occupants was assaulted.

Wish to state that we do not countenance violent or impolite conduct on the part of any member of our staff, either permanent or on secondment to the office and have subsequently requested the relevant state institution that posted the security personnel to withdraw the offending officer with immediate effect.

We hereby render an unqualified apology to the victims of the incident and the general public for any embarrassment it may have caused.