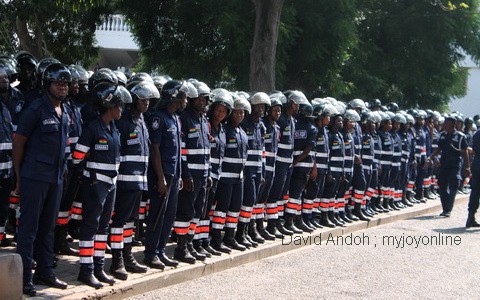 The Motor Traffic and Transport Department (MTTD) of the Police Service has announced the creation of an accident preventive squad on five (5) of the country’s major road networks.

They are tasked with the responsibility to patrol those road networks known to be prone to crashes and enforce the road safety laws.

Head of Education, Research and Training at the MTTD, DSP Alexander Obeng, stated on the Super Morning Show on Joy FM Friday, December 22, 2017, that the setting up of the accident preventive squad forms part of measures being deployed by stakeholders in road safety, to reduce accidents.

A total number of 2,198 individuals lost their lives in 2016 through road crashes while about 240 persons are thought to have died in the month December of that year. Despite the many efforts by stakeholders, the statistics for 2017 does not suggest a decline, DSP Obeng lamented.

Therefore, the establishment of the squad which according to DSP Obeng is “equipped to the teeth” will see a drastic reduction in the figures.

“They are equipped with modern traffic [and] evidence gathering equipment like cameras, scanners and breathlisers, etc,” he told the host of the Show, Kojo Yankson.

No more jogging on Aburi road

In a related development, DSP Allex Obeng has cautioned the public to avoid jogging along the Ayi-Mensah-Peduase stretch on the Aburi Highway following the reopening of that road to traffic.

He said the police will no longer permit the use of the road for the early morning health walk after it was reopened to traffic by the Ghana Highway Authority (GHA), Thursday.

The spot became popular for keep fit activities especially on weekends, following its closure to traffic in 2016 to allow the GHA to fix a net over the mountain to hold falling rocks from causing havoc over the side of the road.

As a result, DSP Obeng says it is now difficult “to allow pedestrians, morning joggers and merry-makers to from tomorrow [Saturday, December 23], go and pitch their tents on that road.”

He, however, noted that the only place left for health walk is the “existing pedestrian walkway on the Accra stretch of the road from Accra.”

He also cautioned vehicle owners to also not to park on the shoulders of the road “because we need the road to facilitate movement or people.

Listen to the audio: