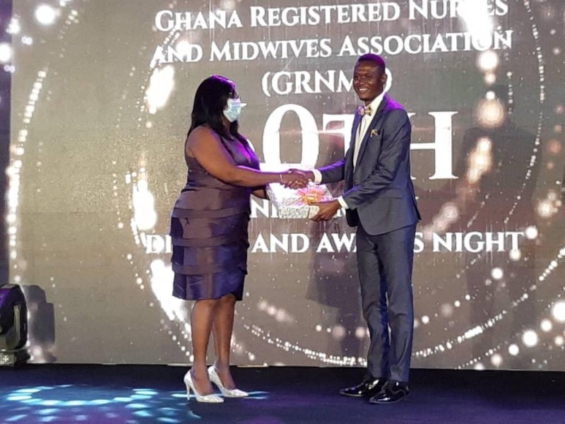 Nursing Officer at the Sandema Hospital in the Builsa North District of the Upper East Region, Wisdom Ayinbono Apusiga, was on Friday adjudged the Best Regional Nurse for 2020 by the Ghana Registered Nurses and Midwives Association (GRNMA).

He was awarded together with nine awardees from the former 10 Regions of the country at the 60th Anniversary dinner and awards night of the GRNMA held in Accra.

Mr Apusiga, who holds a Bachelor of Science degree in Paediatric Nursing from the University of Ghana, Legon had over the years advocated a Hepatitis free society in the Builsa land and Region at large.

The GRNMA in a citation jointly signed by its President, Mrs Perpetual Ofori-Amofo and Mr David Tenkorang-Twum, the General Secretary, indicated that Mr Apusiga was posted to the Sandema Hospital in 2013 as a Staff Nurse.

The Association acknowledged that the awardee “Worked to prove yourself as an effective, inspiring and intelligent young nurse by ensuring a healthy society through health advocacy and imparting knowledge to the next generation of nurses and midwives.

“Your outstanding work and innovations have brought joy and health to the people of your community, society and the region as a whole through the ‘Impact Mission Program’ which you single handedily started,” the GRNMA said in the citation.

The citation stated that the Nursing Officer had educated people on viral hepatitis through radio, small groups, communities and social media, “You have engaged over 35 communities and provided 4,000 free Hepatitis B screening and vaccinations.” It added.

The Association noted that Mr Apusiga served as Programme Coordinator and successfully provided support, mentorship and supervisory role to his colleagues, juniors and interns on the ward through partnership with the Sandema Hospital and the University College of Leuven Limburg, Belgium students exchange program.

“You have positively raised the profile of nurses and midwives through campaigns and breast cancer awareness, prematurity and tramadol awareness among health workers and the community as a whole through radio programmes and outreaches.”

The Nursing Officer who also received a laptop computer as part of his award, served as the GRNMA focal person in the Sandema Hospital, and coordinated its activities in the hospital.

Mr Apusiga told the Ghana News Agency in Accra that “I really feel great and happy that among the lot, I have been recognised. We have been doing lots of projects and least expected an award, but it has come in handy and is something I am so happy about.”