Schumacher ‘fighting for his life’ 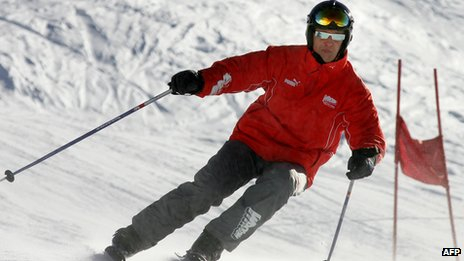 Michael Schumacher, the seven-time Formula 1 champion, is "fighting for his life" after a ski accident in the French Alps, his doctors say.

The driver remains in a critical condition in hospital in Grenoble with head injuries suffered on Sunday morning at the resort of Meribel.

"We cannot tell you what the outcome will be yet," the team treating him told a news conference on Monday morning.

His family are at his bedside.

Schumacher underwent surgery on arrival at the University Hospital in Grenoble.

He remains in a coma and the medical team treating him said that they are working "hour by hour".

Prof Jean-Francois Payen told reporters that if Schumacher had not been wearing a protective helmet "he wouldn't be here now".

"We had to operate urgently to release some pressure in his head," the anaesthetist said.

Neurosurgeon Stephan Chabardes said that a post-operative scan had shown "diffuse haemorrhagic lesions" on both sides of Schumacher's brain.

The 44-year-old German was skiing off-piste with his teenage son when he fell and hit his head on a rock.

Following the accident, Schumacher was evacuated to the hospital in the nearby town of Moutiers.

Prof Chabardes said the driver was in an "agitated condition" on arrival in Moutiers and his neurological condition "deteriorated rapidly".

He was taken from Moutiers to the larger facility in Grenoble.

Schumacher is being kept in a coma at a low temperature to facilitate his recovery, Prof Payen said.

The medical team said that the driver's relative youth and the fact that he was operated on without delay count in his favour.

Tim Wall, who produces a snow conditions report for La Tania, a neighbouring village to Meribel, told the BBC that visibility was good in the area on Sunday.

"There was about 20cm of snow late on Saturday and overnight.

"On Sunday morning the snow was very light and the skies were clear – perfect skiing conditions."

But despite this and a similar snowfall earlier in the week, off-piste snow cover was patchy, he said.

"There have been quite high winds, so there are areas with good snow cover, but where it's exposed there's not much snow."

He won seven world championships and secured 91 race victories during his 19-year career.

He retired in 2006, and was seriously hurt in a motorcycling accident in Spain three years later, during which he suffered neck and spine injuries.

Schumacher managed to recover and made a comeback in F1 with Mercedes in 2010.

After three seasons which yielded just one podium finish, he quit the sport at the end of last year.

The Mercedes F1 team said their thoughts and prayers were with Schumacher and his family.

The team tweeted that the driver had "amazing fighting spirit".

British retired F1 driver David Coulthard said that "if anyone knows how to muster inner strength and determination then there's no doubt in my mind Michael Schumacher is the man to do it".

He told BBC News that Schumacher was "risk averse" as an F1 competitor, like other drivers – contrary to the popular image of the sport.

"It's all about finding the limits of your car, and staying within the limits," he said.

A spokesman for German Chancellor Angela Merkel said she and her government were, like millions of Germans, "extremely shocked".

"We hope, with Michael Schumacher and with his family, that he can overcome and recover from his injuries," the spokesman said.