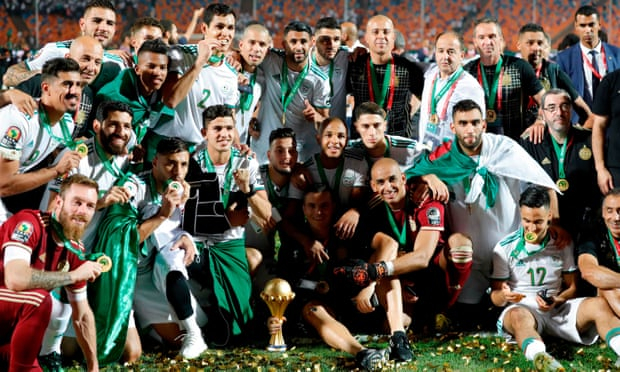 Algeria beat Senegal in the final of 2019 Africa Cup of Nations staged in Egypt.

Djamel Belmadi is now the first local coach to win the title since Stephen Keshi achieved this feat with Nigeria in 2013.

Here are five things we learned from the final.

The final did not live up to its potential in terms of the quality displayed. After Baghdad Bounedjah’s goal in the second minute, the Algerians sat back with no intent to add another goal as early as the first half. Senegal piled the pressure on the Algerians but misfired all game as none of their 12 shots went past Algerian goalkeeper Rais M’Bolhi.

The Algerians, on the other hand, proved to be efficient as they had two shots on goal which were all on target. There were a combined fifty fouls in this year’s finals from both teams showing the amount of physicality and preventing the game to flow freely.

These two coaches have shown that they are the best coaches out of the pile on the African continent currently. Djamel Belmadi’s side were noted for being the best defensive side conceding two goals throughout the tournament.

Aliou Cisse’s side did not take long as they found their feet and performed efficiently except losing to Belmadi’s side twice. On both occasions, Cisse had no answers for Belmadi’s tactics losing to him in the group game and again in the final.

Senegal beat Algeria thrice and drew once when both coaches used to be active footballers for their respective national teams. It seems to have changed since they both took in charge of their national teams.

The Desert Foxes got their desired quick start and scored one of the strangest opening goals in a final. Baghdad Bounedjah’s goal gave Djamel Belmadi’s side the desired start they have been looking for all tournament.

The Algerians look to score first from the sustained pressure and sit deep. After the goal, there were a series of fouls from the Algerians. They tackled aggressively all game committing 14 fouls in the first half and 32 fouls the entire match. A combination of tough tackles and tactical fouls from the North Africans was the highlight of their finals after their goal.

The midfielder was the engine behind Algeria’s title success right from the beginning of the tournament. Playing alongside the solid Adlene Guedioura in the heart of the Algerian midfield, Bennacer delivered both defensively and offensively.

Ismael Bennacer was one of two players in this year’s tournament to complete more than 10 dribbles and 10 plus tackles alongside Riyad Mahrez.

The 21-year-old deservedly won the player and young player of the tournament.

The Algerians played remarkably well during the whole tournament and carried their impressive run of form to the finals.

The Desert Foxes scored 13 goals in the tournament, conceding two and won every group game without conceding a single goal.

Coach Djamel Belmadi showed his tactical prowess by adopting a system that did not solely rely on Manchester City winger Riyad Mahrez. The system allowed most of their players to shine as Baghdad Bounedjah, Youcef Belaili, Adlene Guedioura and player of the tournament Ismael Bennacer delivered consistent performances throughout.

Adam Ounas and Islam Slimani also played their instrumental roles from the bench whenever they were called upon.

One of the most notable achievements for the Desert Foxes was that they never conceded first in a game during the tournament. It would have been surprised if Algeria who were the most balanced team in the tournament did not lift the trophy.