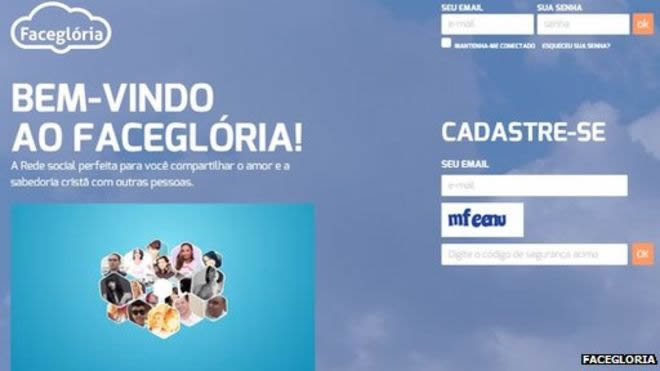 The creators of Facegloria claim the site has attracted 100,000 members since its launch last month.

There are 600 words which are forbidden on the site and an "Amen" button for expressing appreciation for a post.

Ummaland, a social network for Muslims which launched in 2013, currently has around 329,000 members.

"We are creating Ummaland on Islamic values, no small talk, no boasting, no gossiping and backbiting but focusing on the message that really matters," said co-founders Maruf Yusupov and Jamoliddin Daliyev in an interview shortly after the site launched.

Brazil's Facegloria is currently only available in Portuguese but other language services and a mobile app are also planned.

"On Facebook you see a lot of violence and pornography. That's why we thought of creating a network where we could talk about God, love and to spread His word," web designer Atilla Barros told AFP.

Gay material is also banned from the social media platform.

Mr Barros and his three co-founders were working in the office of Acir dos Santos, the mayor of Ferraz de Vasconcelos, when they came up with the idea.

"Our network is global. We have bought the Faceglory domain in English and in all possible languages. We want to take on Facebook and Twitter here and everywhere," he said.

"There are some [programming] languages which have some religious symbols, the most notable is a language called Perl," he said.

"It was written by Larry Wall who is a Christian, and who has expressed that Christian faith, and within the language there are little clues about that. One of the key words is 'bless' – you can bless something, and it has a technical meaning."

"TempleOS is God's official temple. Just like Solomon's temple, this is a community focal point where offerings are made and God's oracle is consulted," reads the operating system's charter.