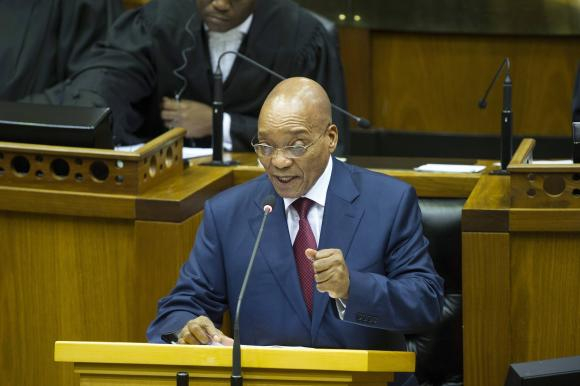 South Africa's President Jacob Zuma will face a no-confidence vote on August 8, five days later than originally planned because of a scheduling clash with a cabinet meeting, the national legislature said on Sunday.

At the same time the ruling African National Congress (ANC) ramped-up its support for Zuma, saying members of its parliamentary caucus who defied the party line were "suicide bombers" who would face punishment if they voted with the opposition.

Zuma has survived four no-confidence votes during his eight years in power owing to loyal voting by ANC lawmakers, who form a strong parliamentary majority, although cracks in unity have begun to appear with a number of allies threatening to break ranks.

The assembly's speaker has yet to decide whether the latest ballot will be held in secret after the country's top court ruled in June that secret votes may be held for motions of no confidence.

Zuma's critics want the no-confidence vote to be anonymous hoping it will embolden lawmakers from his party to support his ouster by shielding them from pressure.

Zuma's administration has been beset by scandals and criticised for failing to address serious economic problems, with calls for his resignation sharpening after he fired the finance minister in March, triggering a double downgrade of the country's debt to "junk".

On Sunday, however, police minister and head of the ANC's sub-committee on organisation, Fikile Mbalula, described party lawmakers thinking of voting Zuma out as "suicide bombers".

"Members of the ANC have no right to represent their own jackets in parliament. They represent the organisation. They are suicide bombers (if they vote against Zuma)," Mbalula told reporters at a media conference.

"The ANC will apply disciplinary procedures for those want to vote using their so-called conscience," Mbalula said.