Spain snatch victory out of the jaws of Iranian draw

Neither boring nor a foregone conclusion, Spain were made to go at great pains to gain a scrappy goal and a happy three points from an Iranian side that simply did not know how to roll over.

For its worth, Iran won over neutral fans after a fearless display processed over tactical discipline, leaving Spain frustrated and at times even heaving a sigh of relief.

Iran fooled the whole world into thinking defence was their only weapon against the European powerhouse as they caused more nightmares than one.

A cruel sidenetting found De Gea rooted to the spot after a 53minute shot inside the box and Spain thanked God for VAR after a 62nd minute goal was chalked off as offside.

Imagine Iran actually getting a ball past De Gea and Spain – Yeah, it happened.

Of course, Iran made it an ambition to defend for 90minutes, knowing a draw against Spain is a big win where they come from.

With three points from their Morocco win, a draw would make it four points and point them closer to Moscow than to Tehran.

And so yes – sit back, watch your back and let Spain attack – a simple team talk that sent the 11 men building a wall to leave Spain building bridges with their passing.

Some 35 minutes into the game, Spain had 300 more passes than Iran's 66 but they didn't mind and actually had it going well for  54 minutes until Spain a team tinkered to attack than defend broke the deadlock through Atletico Madrid man Diego Costa

Manchester City's David Silva's shot from 25 yards punched Hosseini and his freekick from a similar distance flew into the glad arms of goalkeeper Ali Beiranvand.

Sergio Busquets first-time shot in the 50 minute was smothered albeit weakly and then palmed away at his second opportunity to deny a lurking Vazquez.

In the largesse of possession, Sergio Ramos used the match to train his attacking instincts frequently joining in the build-up at the edge of the opposition box.

Against the run of play, Spanish palpitation began in the 53min after Pique headed the throw into the way of Karim Ansarifard inside the 18-yard box. His effort left De Gea rooted to the spot but his shot shook the wrong side of the net – side-netting. 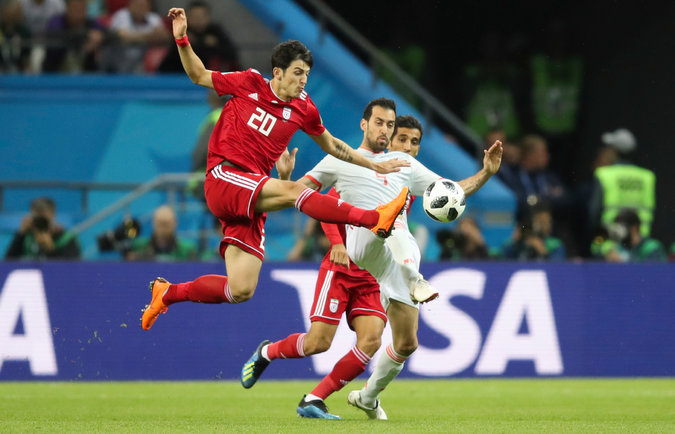 One minute later Diego Costa, who had suffered from very limited service, was in the box to receive Andres Iniesta close range pass.

But the bulky bully had two Iranian defenders to wrestle with and although Ramin Rezaeian appeared to have gotten the better of him, his attempt to clear bounced off Costa's leg from close range to elude the long arms of the goalkeeper for a goal.

But he goal brought the best out of Iran as they took advantage of set pieces and long crosses to cause Spain big problems. First an Ebrahimi cross to the far post found Taremi but his header went wide in the 60minute.

But two minutes later, Iran would spend time to organise themselves for a freekick and it nearly paid off.  The cross teased several players until it bounced off to find Saeid Ezatolahi at the near post.

His shot flew into the net to spark jubilations inside the stadium but the shock was short-lived as VAR showed Ezatolahi was offside. There were some farcical moments too in the 70minute after a blocked shot from a corner fell to Pique at close range but Iranian bodies fell onto the ball like a hero trying to sacrifice himself on a grenade thrown into a market.

Several bodies fell on the ball to shield it from Spanish legs as probing kicks to find the ball attracted an intervention from the referee.

Iran would get a 75minute cross into the box but two high-jumping forwards were still not high enough to connect the header as it flew off out of play to leave Spain relieved.

Amiri nutmegged Pique from the left corner and his brilliant trickery was no fluke as he added a brilliant cross again for Taremi. But what a moment to miss.

Iran would ran and ran in search of an equaliser and Spain would find the final whistle a brand new friend as the game ended the way it was not expected to – a pain for Spain before a gain.