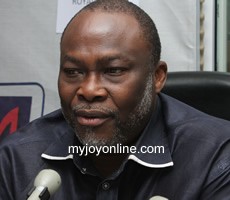 A leading member of the ruling National Democratic Congress (NDC), Dr. Ekow Spio-Garbrah, has said that he is never disappointed for not being nominated for the vacant vice presidential position.

According to him, the nomination of central bank governor, Paa Kwesi Amissah-Arthur as the vice president, is a good choice for the nation at this crucial moment.

To him, Mr. Amissah-Arthur has the requisite experience to support president Mahama to success as a government, due to his competence as a technocrat.

Central Bank Governor, Mr. Kwesi Amissah-Arthur has been named as President Mahama’s nominee for the position of vice president which is subject to parliamentary approval.

Some NDC supporters calling themselves pro-Spio-Garbrah group has kicked against the selection of the central bank Governor as Vice President claiming Dr. Spio-Garbrah would have been a better choice.

However, speaking on Asempa Fm’s current affairs talk show, Ekosii-Sen on Wednesday, Dr. Ekow Spio Gabrah called on all the rank and file of the NDC to respect the decision of president Mahama rather than giving dissenting views.

“We should all thank God that the right man has been chosen so what the president needs is support. I am not disappointed that I was not chosen because I have other things to do. I am a CEO of Action Chapel International so I am working for God now. Some people who were highly tipped will be annoyed but for me I don’t know why God didn’t make me appointed so I am satisfied,” he bellowed.

The CEO of Action Chapel International noted that the tool for the NDC and president Mahama in winning the 2012 elections is unity and all inclusiveness.

To him, the NDC can never win elections without bringing every member of the party on board because every vote counts.

“Before president mills departed, there were barrage of party bickering which needed to be resolved. It even made other aggrieved members to form a new political party so I believe it behoves on the president Mahama administration to deal with all these problems as quick as possible before the campaigns set off. Some in the party think that the party will move with certain group of party members while others believe that everybody is needed but for me every vote is a vote so the unity process must start now,” Spio stressed.

Dr. Spio-Garbrah asserted that the late president mills stood for peace and now that he has gone, the only thing the party can use to remember him is to go into the elections with unity.

He hinted that if given a role in the party’s campaign for 2012, he will work hard to ensure the NDC retains power.