The father and two brothers of the alleged organiser of the Easter Sunday bombings in Sri Lanka, Zahran Hashim, were killed in a security forces operation on Friday, police say.

Hashim, who blew himself up at a hotel in Colombo, founded an Islamist group, the NTJ, which has now been banned.

Police have raided the group’s HQ in the eastern town of Kattankudy.

The Sri Lankan president has announced a ban on face coverings, aimed at Muslim women following the attacks.

The attacks targeted churches and hotels, killing at least 250 people.

Sunday church services were cancelled across the country as a precaution but worshippers in the capital gathered to pray outside St Anthony’s, which was badly damaged in the attacks.

How did Hashim’s relatives die?

Security forces raided a house in Sainthamaruthu, near Hashim’s hometown Kattankudy, on Friday. 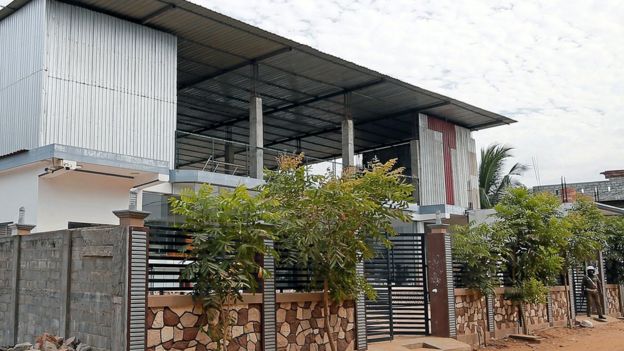 Image caption: Police sealed off the NTJ’s headquarters on Sunday

A close family relative confirmed for BBC News that Hashim’s father and two brothers died in the raid.

Police sources who spoke to Reuters news agency named the three men as Mohamed Hashim, and his sons Zainee Hashim and Rilwan Hashim.

All three had been seen in a video circulating on social media calling for all-out war against all non-believers, Reuters adds.

In Kattankudy itself, police searched the headquarters of the NTJ (National Thawheed Jamath), which Zahran Hashim had led.

Announcing the ban on face coverings, which will begin on Monday, President Maithripala Sirisena said he was taking the emergency measure on national security grounds.

The announcement made no specific mention of the niqab and burka – worn by Muslim women – but instead said people’s faces should be fully visible so they could be identified.

What happened on Easter Sunday?

Sri Lanka has been on high alert since a co-ordinated wave of bombings last Sunday, which also wounded more than 500 people.

The bombings targeted churches that were packed full for the Easter holiday, as well as hotels popular with tourists.

As well as St Anthony’s Shrine, bombers struck churches in Negombo and the eastern city of Batticaloa, and hotels in the capital, Colombo.

Most of those killed were Sri Lankan, but dozens of foreign citizens were also among the dead.

While the authorities have blamed the NTJ for the attacks, they say they must have had help from a larger network.

The Islamic State group, which carried out mass attacks on civilians in Paris and other locations in recent years, has said it was involved, but has not given details.

How are the victims being remembered?

Christians in Sri Lanka prayed at home while the Archbishop of Colombo, Cardinal Malcolm Ranjith, held a televised Mass, attended by the president and Prime Minister Ranil Wickremesinghe.

He called the attacks an “insult to humanity” in the service, broadcast from a chapel in his residence.

“Today during this Mass we are paying attention to last Sunday’s tragedy and we try to understand it,” he said.

“We pray that in this country there will be peace and co-existence and understanding each other without division.”

Scores of people gathered for the public service outside St Anthony’s, where Buddhist monks joined Catholic priests in a show of solidarity with the Christian community.

Crowds of people watched the heavily-guarded church from behind a barricade, with some singing hymns and passing rosary beads through their hands.

Many lit candles and placed them in a makeshift memorial for the victims.

The hands of its damaged clock tower are still stuck at that time.