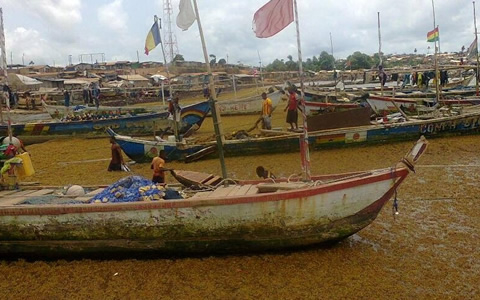 Fishermen in Axim in the Nzema East Municipality of the Western Region have expressed worry over the sudden invasion of their beaches by strange weeds that is posing a big challenge to their activities.

The strange huge weeds which have covered almost the whole shore — stretching from Dixcove to Axim — are causing nuisance to both children and fishmongers.

According to Nana Kweku Eshun, Chief Fisherman of Lower Axim, activities have been halted for the past two weeks due to the weed invasion.

He told infoghana, an environmental news portal, in a telephone interview that they  fear the weeds may be poisonous.

He said his colleagues are afraid to venture into the sea to fish.

"We therefore call on the government through the Environmental Protection Agency to immediately come to our rescue" he added.

Nana Eshun stressed that several complaints have already been lodged about the stench emanating from the weeds but authorities are yet to act.

The Municipal Chief Executive of the area, Mr. James Badioe told reporters he is meeting with the various stakeholders to find a solution to the problem.

He said his office is liaising with various agencies to find the best way to curtail the situation that is threatening the livelihood of fisherfolks in the area.

Meanwhile, some concerned citizens of the affected area and its environs are blaming  the situation on the oil and gas industry in the region.

They argue that this is not the first time these strange weeds have taken over their beaches.