Sudan has repealed a restrictive public order law that controlled how women acted and dressed in public.

On Twitter, Prime Minister Abdalla Hamdok paid tribute to women who had “endured the atrocities that resulted from the implementation of this law”.

Mr Bashir seized power in a 1989 coup and ruled for nearly 30 years before peaceful protests ousted him in April.

Sudan is currently led by a joint military and civilian council, as well as a civilian-led cabinet headed by Prime Minister Hamdok.

Both the repeal of the public order law and dissolution of the National Congress Party (NCP) were a response to key demands of the protest movement, which aims to dismantle Mr Bashir’s regime.

People celebrated in the streets of the capital Khartoum overnight at news of the moves.

Aisha Musa, one of two women on Sudan’s new Sovereign Council, told BBC Newsday that while the former regime had focused on how women dressed and acted – including preventing women from wearing trousers – it had ignored their education and healthcare.

What was the public order law?

A 2017 report by two charities described the restrictions as a blend of legal and moral prohibitions “designed to exclude and intimidate women from actively participating in public life”.

They gave the authorities sweeping powers to arbitrarily control what women wore, whom they spoke to and saw, and any job they might hold – with any perceived offender facing punishment by flogging, or in rare cases stoning and even execution.

Moreover, the public order rules were kept “vague and open-ended leaving them open to exploitation as a social control tool by the authorities,” the report said.

Human rights activist Hala al-Karib told BBC Newsday that repealing the law was a “massive step” for her country, arguing the legislation had enforced the old regime’s ideology, which was “based in terror and discrimination”.

Authorities had had the power to “literally hunt women”, she said, and these laws had disproportionately affected poorer women, women from conflict zones and people outside Khartoum.

But while she welcomed the end of the law, Ms Karib said more needed to be done to end “a very discriminatory legal framework”.

Women were at the forefront of the movement that toppled Mr Bashir. Throughout the demonstrations women were visible on the frontlines, demanding greater freedoms for themselves and their country.

“We need a fair and just country. We have suffered a lot. More than men in many cases. Women should be at the centre of any government,” one activist told Al Jazeera news agency in April.

One 22-year-old student Alaa Salah became an icon for demonstrators after a video of her leading chants against the former leader went viral, earning her the nickname “Nubian Queen”.

On 25 November, Sudan held its first march in decades for the International Day for Eliminating Violence Against Women.

One law for the rich…

The decision to revoke the Public Order Law is a momentous step. The authorities used it in particular to control women. Some received 40 lashes for wearing trousers in public.

The way the law was applied underlined the divisions and tensions within Sudanese society.

In recent years it was common to see rich Khartoum women wearing trousers in public – while those targeted by the morality police were often poorer women from the marginalised areas on the periphery of this vast country.

The NCP, meanwhile, was a colossus, the political vehicle for a regime which tried to reshape every part of Sudanese life – and cracked down extremely hard on anybody who disagreed.

The authorities hope that dismantling the NCP will help stop the old regime from undermining the transitional government.

There is a certain irony about a transitional government set up to move the country to democracy banning a political party. But nobody other than its partisans will mourn the NCP, which is blamed for creating so much misery.

Those who led the protests – and women’s rights activists in particular – are celebrating the demise of the NCP and the law, even if they recognise this is just the start of a longer struggle to transform Sudan.

What about Mr Bashir’s party?

Dissolving Mr Bashir’s National Congress Party (NCP) means that the authorities can seize the party’s assets. The decree confirmed that a committee would be formed to do this.

This, Mr Hamdok tweeted, was so they could “retrieve the stolen wealth of the people of Sudan”.

The decree also said “none of the symbols of the regime or party would be allowed to engage in any political activity for 10 years”. 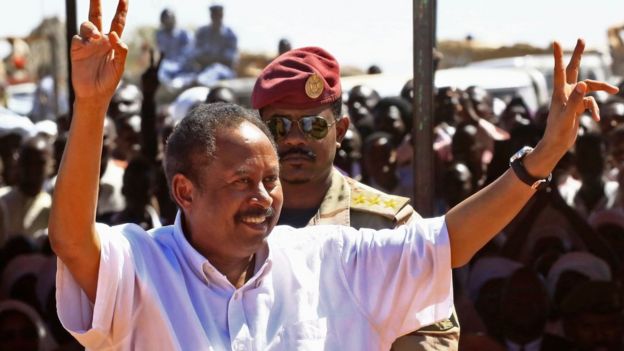 A spokeswoman for the Sudanese Professionals Association, the protest group that toppled Mr Bashir, told the BBC this was “a historic moment”.

“This is a moment of relief, because each and every person in Sudan has been affected in some way or the other by this regime in a negative manner,” spokeswoman Samahir Mubarak said.

But the NCP condemned the move as “nothing more than a moral scandal, an act of intellectual bankruptcy and a total failure on the part of the illegal government”.

“The party is not bothered by any law or decision issued against it as the NCP is a strong party and its ideas will prevail,” a post on the party’s Facebook page read.

The unrest in Sudan can be traced back to December 2018, when the Bashir government imposed emergency austerity measures.

Cuts to bread and fuel subsidies sparked demonstrations in the east over living standards, and the anger spread to the capital.

The protests broadened into demands for the removal of Mr Bashir – who had been in charge for 30 years.

In April, the president was overthrown by the military after sit-ins outside the defence ministry, but demonstrators then wanted to ensure authority was swiftly transferred to a civilian administration.

A transitional government which came to power in August has vowed to reunite the country.