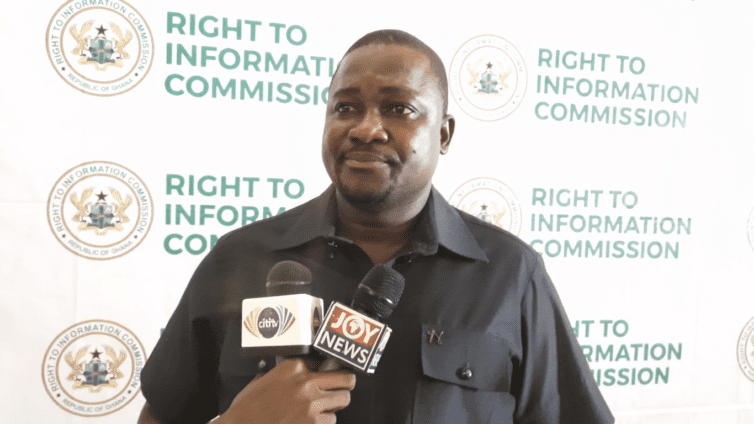 He said the manual will guide persons requesting information about what is available by law, urging state institutions to make them public.

Mr Sarpong Boateng was speaking at a forum in the Bono Regional capital, Sunyani, as part of the commission’s effort to educate and sensitize the general public to the RTI Law and the commission’s work.

Present at the forum includes the Board Chairman of the RTI Commission, Justice A.K. Ofori Atta (Rtd), some board members, security personnel, representatives from the assembly, identifiable groups, media personnel, and some members of the public.

“The law says that every public institution must compile an information manual which will indicate the kind of information likely to be found at the institution”, Mr Sarpong Boateng said.

He further explained that “the manual will serve as a guide to someone who goes to an institution to look for information to be able to tell from that document what can be found at the institution”.

He said the RTI Law covers every public institution and gives people the right to access all sorts of information apart from exempt information under Article 21 paragraph (f) of clause (1) of the 1992 Constitution of Ghana.

The exempt information, he said, is information on the President or the Vice-President, the Cabinet, law enforcement and public safety, international relations, security of the state, and the economy or any other interest. The rest, he said, are financial information of third parties, tax, internal workings of public institutions, parliamentary privilege, fair trial, contempt of court, privileged and personal information.

Executive Secretary of the RTI Commission, Yaw Sarpong Boateng, assured the general public of the commission’s unbiasedness and independence in discharging their mandate in applying the law backing the RTI.

“It doesn’t matter who is involved; we make sure it is what the law says that we put across. And that is a clear indication of how independent-minded the commission is. From the work we do, you can see that it is a purely technical job. There is no way we reduce ourselves to interference by the political parties. And as a leader of this commission, expect the best of standards from us”, he said.

The RTI Commission, established under section 40 of the RTI Act, 2019 (Act 989), is mandated to promote, monitor, protect, and enforce the right to information to promote transparency in public discourse and hold government institutions accountable to all.

The Board Chairman of the RTI Commission, Justice A.K. Ofori Atta (rtd), noted that the law is a sure means of fighting corruption in Ghana as “secrecy is an exception”.

Since everyone can seek information, Justice A.K Ofori Atta (rtd) urged the public to use the RTI law to advance the country’s course.

“This country will go forward if you and I can use this law effectively since it has not been made for specific persons but all Ghanaians”, he said.

Some participants hope the knowledge acquired will help them demand accountability from the state institutions.