Superblocks have parks where traffic used to be

In the centre of bustling and busy Barcelona there is unusual quiet: just the babble of children playing in a small playground and the sound of the birds.

There is virtually no traffic and the space where cars would have parked is given over to play areas, trees and even a running track.

Superblocks is a radical plan to reclaim the streets from the noise and pollution of traffic, one that could save hundreds of lives that might otherwise be lost because of heavily polluted air. It also hopes to act as a blueprint for other cities.

There are just six superblocks so far, but Barcelona plans hundreds of others. They are made up of nine existing blocks joined together into an area which bans all but essential vehicles - which are limited to 10 kph (6mph). Parking for residents is underground. 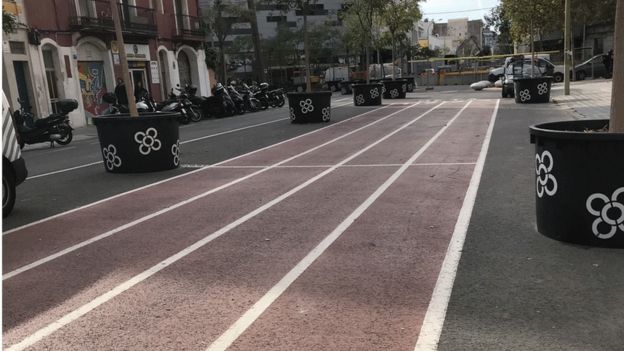 Image captionMany ideas are being trialled, such as this running track

Some residents are opposed to the plan, either because they want to have their cars outside their homes or because they run local businesses and feel that trade will be affected by cutting off traffic flow.

But the idea is proving popular with other cities such as Seattle, which is considering introducing something similar.

"Cars take up 60% of public space across the city," explained Barcelona's deputy mayor for urbanism Janet Sanz in a recent BBC interview.

"As soon as you redistribute that space and rebalance the situation, you are supporting groups that until then have had no access to that space."

It is not just traffic that Barcelona has a radical plan to shake up - it is also leading the field when it comes to the guardianship of citizens' data - something that is becoming more of an issue as cities collect it via sensors, CCTV cameras and even telecom networks. 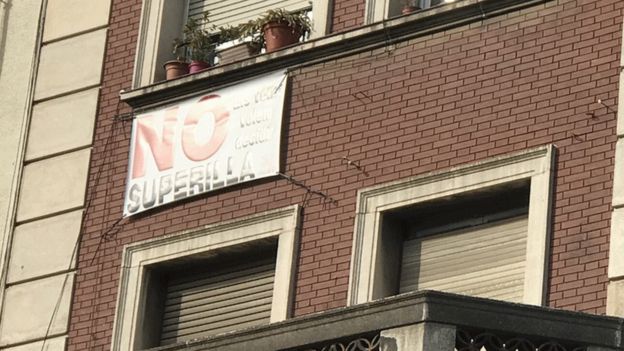 Image caption: Not everyone is in favour of Superblocks

Under a plan initiated with other cities including Bordeaux, Edinburgh, Florence and Manchester, Barcelona is determined that citizen data - defined as personal or non-personal information generated in the digital public sphere - should be recognised as a public and individual asset and should be used solely in the public interest.

"We believe that technology has to be at the service of citizens to improve the quality of life in cities and not to create digital exclusion," said the city's commissioner for digital innovation, Michael Donaldson.

"Smart doesn't just come from the intelligence provided by the technology but also from the citizens, their experience, their knowledge which can be gathered to make better public decisions." 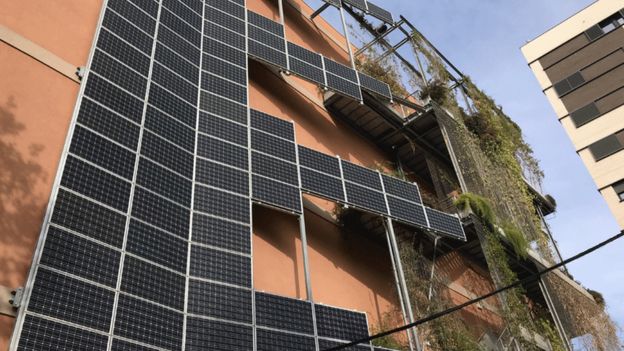 Image caption: The buildings in the superblock generate their own electricity with excess sold back to the grid

"We need to explain how we collect it, what we collect and what we are going to do with it," he said.

Barcelona's city council is championing two pilots next year, one which will look at how to tackle sustainable energy by generating it from road surfaces, and the other focused on how technology can be used to help the city's elderly population.

To really make cities inclusive for all citizens, the data that cities collect needs to be analysed to take account of groups who may have been ignored previously, such as women, people of colour and those with disabilities, says Massachusetts Institute of Technology (MIT) assistant professor Catherine D'Ignazio.

"Our discourse on smart cities hasn't been very inclusive, in terms of gender, race and accessibility. We are designing cities that work really well for elite white men and not very well for the rest of us."

Some in Barcelona, such as the feminist urban planner co-operative Punt 6, are trying to reset the balance by looking at areas such as mobility patterns in the city to find out how women, children and the elderly get around - and it is often in very different ways to men. Women use more public transport, for instance.

"Often we think that we don't want to discriminate so we will ignore gender which is a silly approach. We don't fix a problem by ignoring it and we do have a problem with creating inclusive cities," said Ms D'Ignazio.

"Too often corporate vendors are coming into cities and saying 'we can do X, Y and Z' and city governments, starved for resources, are like, 'great, let them handle it'. And both the tech company and the city government are elite, mainly white men and miss out on deeper community engagement."