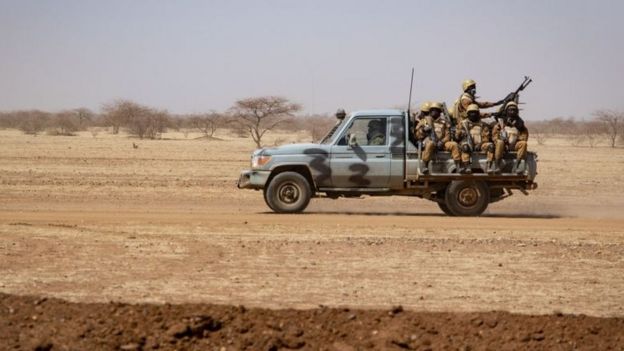 Soldiers have been fighting jihadists in Burkina Faso since 2016

The Executive Director of the West African Centre for Counter-Extremism (WACCE), Mutaru Mumuni Muqthar, says the end goal of terrorists in the sub-region is to gain total control of West Africa and introduce their own style of government.

According to him, this has largely been the reason for their southwards expansion from the Sahelian regions.

“Strategically, they’re moving beyond the Sahelian state seeking to take control of territory of the entire West African space’ and they’re looking for vulnerabilities,” he said.

He noted that the violence that led to the destabilization of the Libyan state gave impetus to terrorist groups in Mali to up their game and expand to other countries.

Speaking on JoyNews’ PM Express, he stated that several terrorist organisations have in the recent past made clear their intention to attack Ghana, thus justifying the government’s threat alert.

“And so the destabilization of Libya, allowed the terror rebels in Mali to expand in terms of their capabilities and Mali got disintegrated, the spread went further, you see in Chad, Niger and then the last three years pervasive violence in Burkina Faso.

“And we know in the last five, four years, extremists groups, the traditional ones we have today like the JNIM, the Islamic State in the Greater Sahara, al Mourabitoun and several of those groups have specifically mentioned Ghana as part of the groups of countries that they’re seeking to attack,” he said.

He further explained that their primary motivation is to take control of territory and establish their form of religious governance.

“Ghana is mentioned as part of the countries that they’re seeking to attack within West Africa because terrorists groups are looking for one, to take control of territory, to administer the form of governance they believe is pure and we’re looking at it from those driven by religious goals and religious ideals.

“They’re seeking to take charge of territories to govern, and they’re seeking to weaponise the grievances of local populations to engage in the violent activities that they’re engaged in,” he said.