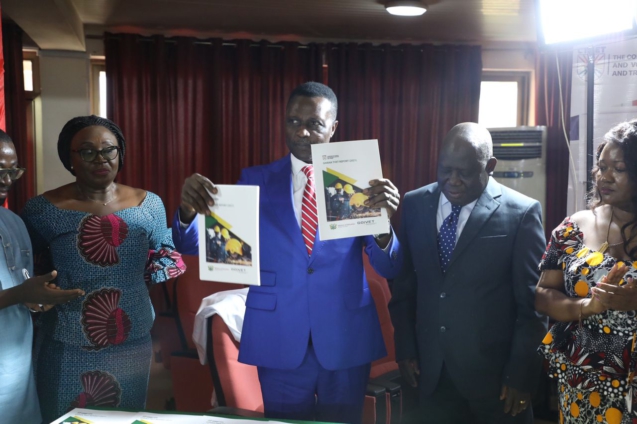 The Minister of Edication, has disclosed that enrolment into tertiary Technical and Vocational Education and Training (TVET) institutions in the country will hit 100,000 by 2025 as against the current 62,000.

Dr Yaw Osei Adutwum said the feat will be achieved after the completion of the ongoing construction works for seven TVET colleges to boost skills acquisition of artisans and learning of TVET courses at the tertiary education space.

The Minister for Education stated that after the construction of the new colleges, many TVET students would have the opportunity to upgrade their skills at the tertiary level to boost their productivity.

He mentioned the location of the new TVET colleges as Abrankese in the Ashanti Region, Boako in the Western North Region, Kenyasi in the Ahafo Region, Patuda in the Bono East Region, Dambai in the Oti Region, Salaga in the Savannah Region, Guabuliga in the North-East Region and Tolibri in the Upper West Region.

Dr Adutwum announced this when he launched the maiden edition of the “Ghana TVET report 2021” put together by the Commission for TVET in Accra on Friday.

The launching brought together various players in the education sector and the TVET space as well as partners from the international platform.

According to the Minister, looking at the policies, support, acceptability and the huge investment being made by the government in the Technical and Vocational Education and Training (TVET) space would bring about the transformation of the industrial sector leading to the socio-economic gains for the country.

Commendation
The Education Minister commended President Akufo-Addo for the tremendous resources and support he had provided in order to make a more vibrant TVET regime and an ecosystem to make the TVET system thrive amid the economic challenges like the Covid-19 and the Russia –Ukraine war confronting the country and the rest of the world.

According to him, despite all the challenges confronting the nation’s economy seven new colleges focussing on TVET were under construction at various locations across the country to help train many youths to support industrial growth in the country.

German Dual System
Dr Adutwum who is also the Member of Parliament for Bosomtwe hinted again that with effect from the next academic year, some selected TVET institutions in the country would begin operationalising the “German Dual System”.

He explained that the Dual System is a process whereby students would be granted the opportunity to study at school and also take part in industrial attachment to sharpen their skills to boost their training at school in turn.

“This would see TVET students spending some days in school and some days with industry to enhance their learning skills and this would help create more employment to make the sector more relevant to the society and the nation as a whole”. Dr Adutwum said.

All these training and skills sharpening he said, were being done in partnership with stakeholders in the industrial sector who would allow students to use their facilities and equipment for training which could lead to creating employment opportunities mostly for the youth.

The Director General of the TVET Commission, Dr Fred Kyei Asamoah, in his welcome address lauded the various partners and all stakeholders who helped put together the maiden report.

He stated that the TVET sector is very crucial for the training and recruitment of the right skills needed to boost the nation’s socio-economic development.

The Director General was upbeat about the sharpening of the skills of people as it is very crucial in poverty reduction in the country as well as empowering the people to be self-dependent.

He was not happy with the general bias people had for the general education in the country at the expense of TVET which provides the right skills needed to create a job to support the nation’s gross domestic product.

Dr. Asamoah indicated that the TVET sector is positioning itself to train people in skills that are in short supply in the job market within the country and the rest of the sub-region.