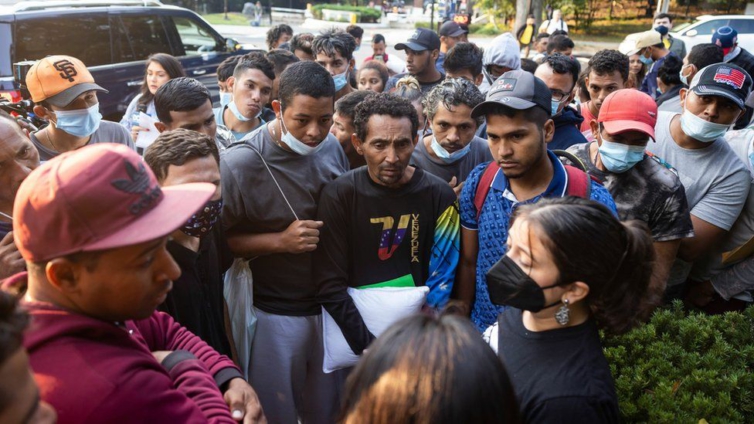 Migrants outside the vice president's residence in Washington DC on 15 September.

Two buses carrying migrants were sent from Texas to just outside Vice-President Kamala Harris’s residence in Washington DC on Thursday, amid a growing political row over immigration.

The state’s Republican governor said the move was intentional and called for tighter immigration policies.

It comes a day after Florida sent migrants to a Massachusetts island.

Both states appear to be escalating a tactic which has seen Republican states send migrants to Democratic areas.

As political tension over the number of people arriving at the US-Mexico border grows, states such as Texas and Arizona have sent thousands of migrants to cities such as Chicago, New York and Washington DC which they accuse of failing to fully enforce immigration laws.

While legal experts say the tactic will likely be challenged in court, it remains unclear what the legal basis for such a challenge would be.

Immigration groups in both Washington DC and the wealthy Massachusetts island of Martha’s Vineyard said they were not given an advance warning about the arrivals.

Footage shown on Fox News showed two buses – reportedly carrying between 75 and 100 people – arriving near the vice-president’s residence and migrants, who were mostly from Venezuela, gathering their belongings and standing nearby. A non-governmental organisation later came and reportedly transported them to a church.

“Harris claims our border is ‘secure’ [and] denies the crisis,” Texas Governor Greg Abbott later wrote on Twitter. “We’re sending migrants to her backyard to call on the Biden Administration to do its job and secure the border.”

Among the migrants on the buses in Washington were Delinyer Mendoza and his partner Maybel, a young Venezuelan couple who arrived in the US five days ago after an arduous trek through Central America and Mexico.

While officials in Texas told the couple they were headed to Washington, the pair only learned that they were at the vice-president’s house when told by journalists.

“We didn’t know,” Maybel said. “We’re finding out about this from you all… we’re in limbo and were just going to walk around not knowing where we were.”

The pair said they planned to spend the day with a local humanitarian organisation before heading north to New York, where Mr Mendoza has family.

Another migrant, Cuban national Leonardo Perdomo, told Reuters that he had boarded a bus in Texas after officials offered him passage to Washington “free of charge”.

A local volunteer helping the migrants, Carla Bustillos, was quoted as saying that immigration organisations were only told about the arrivals at the last minute. “While we’re doing this political show, we have human beings feeling that their suffering is being exploited,” she said.

In a similar move on Wednesday, two planes carrying migrants were flown to Martha’s Vineyard in Massachusetts. The resort is a traditional summer destination for Hollywood stars and former President Barack Obama is among those who have holiday homes in the area.

The migrants, including children, arrived at about 15:00 (11:00 GMT) on Wednesday without any warning, according to Massachusetts State Senator Julian Cyr.

Officials and volunteers then “moved heaven and earth” to set up the response like “we would do in the event of a hurricane”, he said. Migrants were given food and clothing as well as being tested for Covid.

Many did not know where they were, according to Massachusetts state Representative Dylan Fernandes. They had been told they would be given housing and jobs, he said.

On Twitter, Mr Fernandes described the move as an “evil and inhumane” plot to use “human lives – men, women and children – as political pawns”.

Speaking at an event in Florida, Governor Ron DeSantis said the state was willing to help facilitate the movement of migrants to be able to go to “greener pastures”.

He also said Florida was not a “sanctuary” state. So-called sanctuary cities in the US are cities that have policies to aid undocumented immigrants.

“All those people in DC and New York were beating their chest when Trump was president, saying how they were so proud to be sanctuary jurisdictions,” Mr DeSantis said. “The minute even a small fraction of what those border towns deal with every day is brought to their front door, they all of a sudden go berserk.”

Aleksander Cuic, an immigration lawyer and the director of the Immigration Clinic at Case Western Reserve University’s school of law, said that while he believes efforts to relocate migrants in this way will be legally challenged, it is still unclear what – if any – laws may have been broken.

“The big question is what they are being told, and if there is any sort of fraud or inducement,” he told the BBC. “But how would anyone know if there’s nothing in writing? It could be that they [the migrants] are willingly saying they’ll go if there are jobs and opportunities.”

Mr Cuic added that authorities in Texas and Florida are likely to argue they “are doing the same thing” as the government, which regularly moves detained migrants around the country.

Governor DeSantis has previously cited Martha’s Vineyard as a possible destination for migrants being sent out of his state, telling reporters last year that if they were, the “border would be secure the next day”. This year, Florida representatives set aside $12m (£10.4m) for transporting migrants.

It is unclear how many migrants Florida plans to send to other states. The BBC has reached out to Governor DeSantis’ office for comment.

DISCLAIMER: The Views, Comments, Opinions, Contributions and Statements made by Readers and Contributors on this platform do not necessarily represent the views or policy of Multimedia Group Limited.
Tags:
Anti-Immigration
Martha's Vineyard
Texas