The Nigerian village where men and women speak different languages 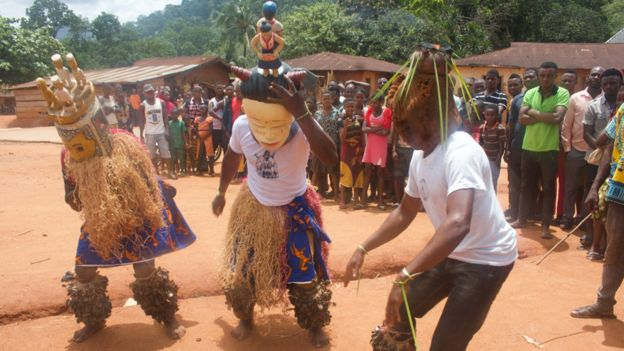 In Ubang, a farming community in southern Nigeria, men and women say they speak different languages. They view this unique difference as "a blessing from God", but as more young people leave for greener pastures and the English language becomes more popular, there are concerns it won't survive, reports the BBC's Yemisi Adegoke.

Dressed in a brightly coloured traditional outfit, a red chief's cap and holding a staff, Chief Oliver Ibang calls over his two young children, eager to demonstrate the different languages.

He holds up a yam and asks his daughter what it is called.

"It's 'irui'," she says, without hesitating.

But in Ubang's "male language" the word for yam, one of Nigeria's staple foods, is "itong".

And there are many other examples, such as the word for clothing, which is "nki" for women and "ariga" for men. 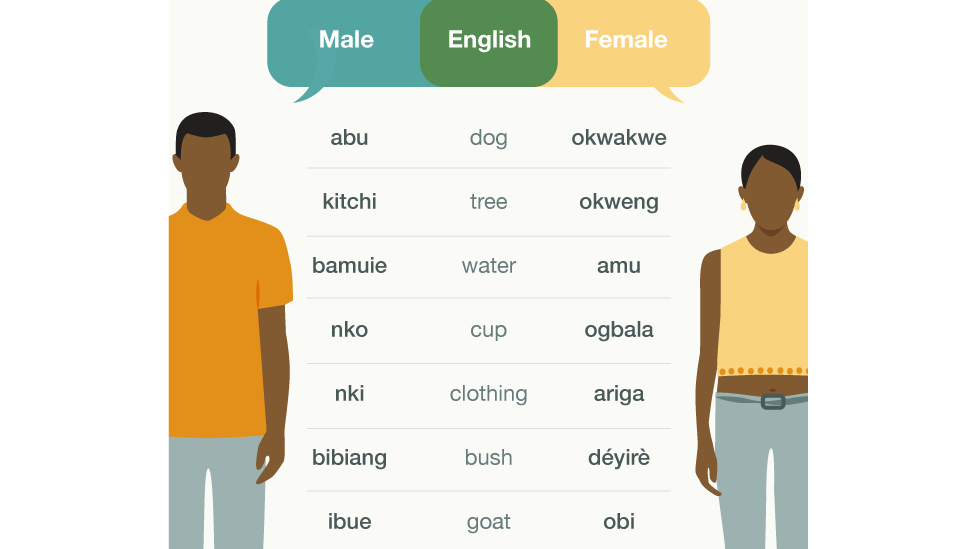 It is not clear exactly what proportion of words are different in the two languages and there is no pattern, such as whether the words are commonly used, related or linked to traditional roles for men or women.

"It's almost like two different lexicons," says anthropologist Chi Chi Undie, who has studied the community.

"There are a lot of words that men and women share in common, then there are others which are totally different depending on your sex. They don't sound alike, they don't have the same letters, they are completely different words."

She says the differences are far greater than, for example, British and American versions of English.

However, both men and women are able to understand each other perfectly – or as well as anywhere else in the world. 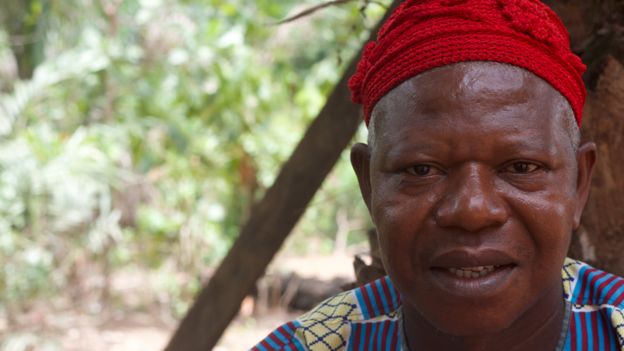 This might be partly because boys grow up speaking the female language, as they spend most of their childhoods with their mothers and other women, as Chief Ibang explains.

By the age of 10, boys are expected to speak the "male language", he says.

"There is a stage the male will reach and he discovers he is not using his rightful language. Nobody will tell him he should change to the male language."

"When he starts speaking the men language, you know the maturity is coming into him."

If a child does not switch to the correct language by a certain age, they are considered "abnormal", he says. 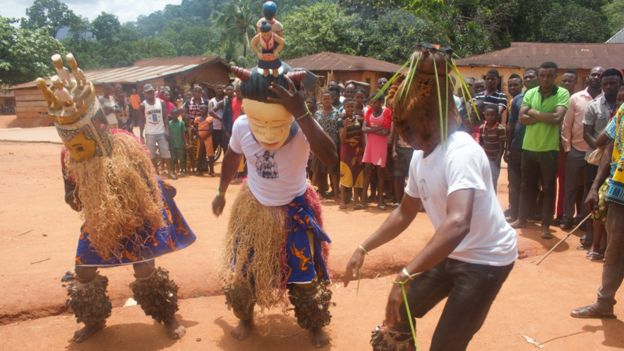 Ubang people are immensely proud of their language difference and see it as a sign of their uniqueness.

But there are different theories about how it happened. Most of the community offer a Biblical explanation.

"God created Adam and Eve and they were Ubang people," says the chief.

God's plan was to give each ethnic group two languages, but after creating the two languages for the Ubang, he realised there were not enough languages to go around, he explains.

"So he stopped. That's why Ubang has the benefit of two languages – we are different from other people in the world."

Ms Undie has an anthropological theory.

"This is a dual-sex culture," she says.

"Men and women operate in almost two separate spheres. It's like they're in separate worlds, but sometimes those worlds come together and you see that pattern in the language as well." 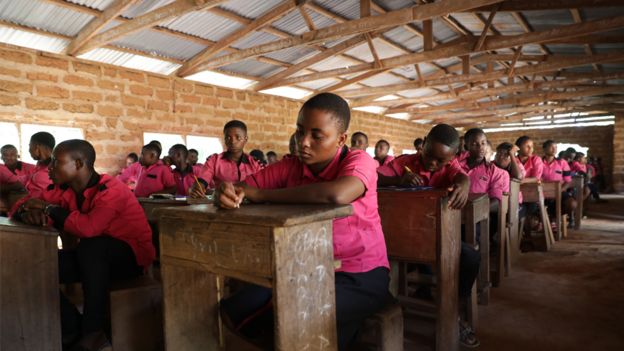 Image captionUbang children are discouraged from speaking their language in school

She notes that her theory does not have all the answers.

"I call it a theory but it's weak," she admits. "Because in Nigeria there are lots of dual-sex systems and yet we don't have this kind of language culture."

There are concerns about the survival of the different languages.

Neither the male nor female language is written down so their futures depend on the younger generation passing them down. But these days, few young people speak either fluently.

This mirrors what is happening across Nigeria.

In 2016 the Linguistic Association of Nigeria said that 50 of the nation's 500 languages could disappear in the next few years if drastic measures were not taken.

Yoruba, Igbo and Hausa are Nigeria's major languages, as well as English – used to foster unity in a country with numerous ethnic groups. 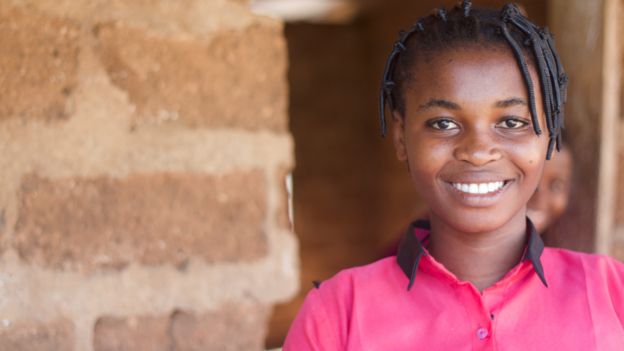 The three major languages are taught in schools as part of the country's National Policy on Education, which speaks of the importance of preserving culture.

It also states that "every child shall learn the language of the immediate environment".

But this is not being enforced in Ubang, where children are discouraged from, and even punished for, speaking their language in school.

Mr Ochui says he is worried about the consequences of "demonising" the mother tongue in an attempt to encourage students to speak English instead.

"In my school here we punish students – beat them, at times they pay fines – for speaking their mother tongue," he says.

"If you beat a child for speaking his or her language, it will not survive."

"We need text books in Ubang languages – novels, art, films – and they should allow us to teach the languages in schools," he says.

Stella Odobi, a student in Ubang, agrees more need to be done to stop the languages dying.

"Parents take their children to study in different communities and don't bother to teach [them] their mother tongues," she says.

But she says she is among many young people within the community who plan to pass the languages down to their children even if they leave Ubang. 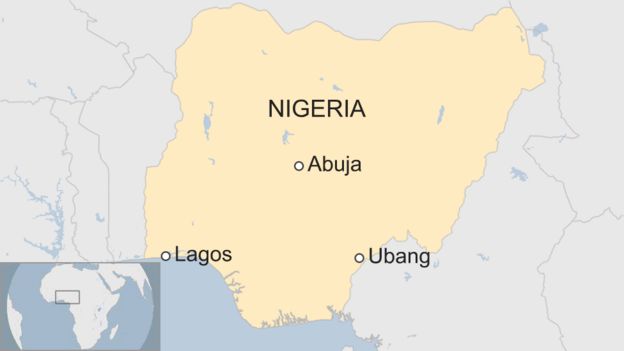 Chief Ibang has dreams that one day a language centre will be set up in Ubang, showcasing the uniqueness of the community's two languages.

And he is confident that the languages will survive.

"If the languages die, then the Ubang people will exist no more."