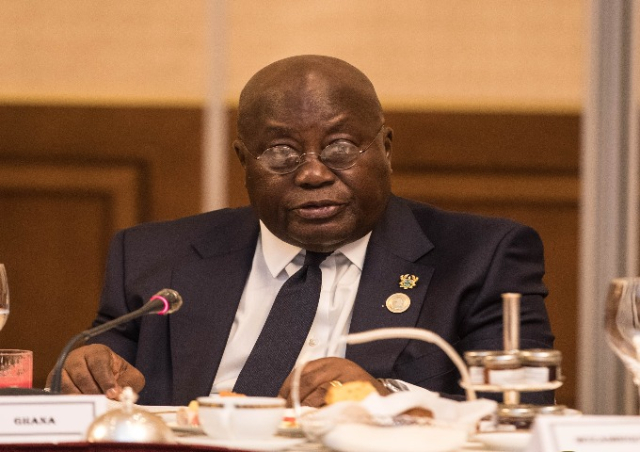 Dear Mr President I greet you.

Please do you have a langalanga? If you don’t, there’s a guy who sells agro products right by Baatsonaa Total, I’m sure I can get one for you.

I’m not asking because I feel like weeding, I’m asking because I think you need one. You need it because you need to do some weeding.  To be honest Sir, some of your ministers’ performance is not impressive at all.  Kindly weed them off, God knows your government is large enough.

I’m not talking about the feeble prunning of a reshuffle that you just did, I’m talking about hardcore weeding, the kind you see inmates of prisons and guardrooms doing on weedy tracts along our roads and highways. Not with weeding machines, strimmers or mechanised weeding with mowers or with hoes and cutlasses. I’m talking adÉ”w proper with a well-honed langalang.

Some of your ministers, deputies are not exempted, must go home.  They’ve had two years to justify their inclusion and they haven’t delivered.  With the exception of the following, I consider all remaining ministers to be overgrown grass who must be hacked away.

ðŸ‡¬ðŸ‡­ The Finance Minister – freedom from IMF, payment of outstanding salaries and allowances of teachers, nurses.  Reimbursement of NHI providers owed colossal amounts of money has injected life into the scheme.

Stemming of wasted, much-needed funds with the introduction of paperless systems; implementation of new policies and provision of funds for fledgling projects indicate the Minister and his team are on top of their game.

Cleaning up the mess in the finance sector is very timely. All that notwithstanding, the cedi’s free-fall must not only be stopped, it must be reversed.

ðŸ‡¬ðŸ‡­ The Minister of Education and his deputies – this team is simply fantastic.  With Hon Napo’s forehead cast in flint and his ‘hard eyes’ coupled with his highly articulate, knowledgeable, experienced deputy, I’d say they make the best team.  And they deliver!

The School Feeding Program is back up on its feet.

The Scholarship Secretariat has been reorganised and is working efficiently.

ðŸ‡¬ðŸ‡­  The Minister of Railways – who said lawyers only know “I put it to you, I put it to you”?  We are seeing the results of his and his team’s hard work.  Kudos to them.

ðŸ‡¬ðŸ‡­  The Food and Agriculture Minister – need I talk about his performance when the evidence is so clear?  The over-abundance of foodstuff and grains and we exporting some to neighbouring countries is a definite bonus!

The well-organised buffer stock system, higher yields in cocoa, we venturing into greenhouse farming, restoring the services of agriculture extension officers and employing qualified but unemployed officers are all definite pluses.  I’ll say ayekoo to him and his team.

ðŸ‡¬ðŸ‡­  If I’m able to make and receive payments for goods and services without having to step foot in a bank or write cheques, then I guess the Minister of Communication is delivering.  But for some unnecessary hardheadedness and abrasion with stakeholders, her tenure would have been a great one.

ðŸ‡¬ðŸ‡­  The Energy and Petroleum Minister should pause patting himself on the back and fix the rampant powercuts we’ve been experiencing lately.  They’re most unamusing.

ðŸ‡¬ðŸ‡­  Attorney General and Minister for Justice –
They may be making inroads in bringing people to justice, but the wheels are grinding much too slowly!  What happened to Woyome’s case(s)?  The least said about the Special Prosecutor, the better for my blood pressure.

The arrangement where judges visit prisons and sit on cases to reduce congestion and deliver justice is very laudable and must continue.

I really admire the Chief Justice for her drive to
ensure the district assemblies house law courts in safe, tailored to suit buildings.  Most of the buildings housing our courts are in deplorable states.

ðŸ‡¬ðŸ‡­  I don’t see why the Minister of Gender, etc, etc was removed, I thought she was perfect for her role, but what do I know?  I think the incoming deputy has Otiko’s charisma, I hope she performs.

ðŸ‡¬ðŸ‡­  Minister of Roads and Highways – I hear a lot of road construction is ongoing in the hinterlands.  Very good.  I’ll however, smile wider when I see our pothole-ridden Accra roads patched up or reconstructed.

I haven’t used the Tema motorway in a while, shouldn’t it’s expansion works on it be starting?

I just love how the DVLA has undergone such tremendous improvement.  With the opening of franchises all over, there’s very little hassle when one’s drivers license or vehicle’s road worthy certificate has to be renewed

The out-of-order traffic lights are his responsibility right?  That set at T-Junction has had one light hanging upside down since the middle of last year.  I guess it needs to fall on a motorist, motorcyclist or street hawker before it gets repaired.

I would like to know when the Kpeshie Bridge will be fixed.  Rehabilitation works were supposed to have begun on it about yen years ago.  We are driving on a disaster-in-waiting.

ðŸ‡¬ðŸ‡­  Minister of Health – nurses trainees’ allowances have been restored.  Thousands of qualified, graduated doctors, nurses, technicians who were made to stay at home by the previous government because it couldn’t afford to employ them, have been absorbed into the healthcare services and are now in gainful employment.

The impending arrival of 275 properly fitted ambulances for our constituencies is good news indeed and they are very welcome.

I’m highly disappointed that the criminals who set the medical stores ablaze to cover up their fraudulent activities there have still not been prosecuted.  It’s a big shame, others have been jailed for less.

ðŸ‡¬ðŸ‡­ Information – although the Minister is very eloquent, intelligent, knowledgeable, courteous and all that, I have a problem with how information is disseminated.  It’s just too poor!  Very little is known about the achievements of the government, especially in the interior.  The Minister and his deputies must sit up.  They must liaise with the party’s communication team for more effective transmission.

ðŸ‡¬ðŸ‡­  Minister of Foreign Affairs – I think she should sit up.

ðŸ‡¬ðŸ‡­  I really would like to see the Minister for Works and Housing commission some completed housing units.  He has very little to show for, since coming into office.

ðŸ‡¬ðŸ‡­  Minister for Business Development – starting up thousands of young men and women with their own businesses is such a laudable idea.  It is creating jobs while reducing over-reliance on the government for employment.

ðŸ‡¬ðŸ‡­  Minister of Interior – we need a more visible police presence on our roads, especially at traffic lights.  Motorists flagrantly abuse road regulations and keep getting worse by the day.

ðŸ‡¬ðŸ‡­  Minister of Sanitation – I do not envy Madam Cecilia Dapaah at all.  She’s got such an uphill task to perform!  The sanitation situation is so bad, so daunting.  I pray she gets the necessary funds and resources to execute her role successfully.

ðŸ‡¬ðŸ‡­  Minister for Trade and Industry – I hope they’re succeeding in resolving the woes of the stakeholders in the textile industry, especially with the flooding of the market with fake designs from China.  I suppose the tax exemption granted them will help keep the industry from collapsing.

The 1D1F concept is very laudable and will definitely improve the unemployment situation. Perhaps the status of a factory, whether new or preexisting on the verge of collapse and revived with government’s help should be declared during commissioning.

ðŸ‡¬ðŸ‡­  Minister for Regional Reorganisation and Development – for overseeing the smooth creation of six additional regions.  He and his team did a very good job.

ðŸ‡¬ðŸ‡­  Regional Ministers – I don’t know how their performance is, but I do hope they are working and earning their salaries.  I hope the six new ministers will work assiduously in their baby regions to meet the objectives for creating them.

If I didn’t mention a ministry, it could be that the minister is underperforming and must be cut and replaced.

It could also be due to the fact that the ministry is redundant and must be  dispensed with or consolidated with another, to save us precious money.

Mr President, you work so hard, unfortunately not all your appointees are on the same page as you.  Please you need to do more weed control than yesterday’s halfhearted reshuffle to get the work that you’re in a hurry to get done, duly completed.

The writer lives in Sakumono. She may be contacted via email on
hrhqueenroyale@yaho.com.

DISCLAIMER: The Views, Comments, Opinions, Contributions and Statements made by Readers and Contributors on this platform do not necessarily represent the views or policy of Multimedia Group Limited.
Tags:
President Langalanga