The propaganda against Nana Akufo-Addo will not wash! – NPP 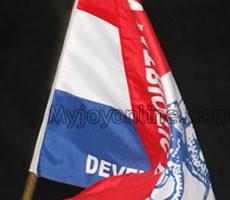 Quoting a letter Nana Akufo-Addo wrote dated 3rd October 2011 in reply to the request of the Great Cape Company for authentication of his signature, Mr Ablakwa argued the NPP flagbearer was complicit.

The NPP replied with a statement issued Tuesday.

Read the entire statement below.

The NDC in their press conference yesterday, July 16, 2012 sought to involve the NPP Presidential Candidate Nana Akufo-Addo in a desperate attempt to create confusion and diversions around their payments of judgment debts/settlement claims.

The NPP Presidential Candidate, in 2001, when he was Attorney-General, had responded to a petition from Great Cape Ltd, claiming supplementary interest payments on an earlier 1997 payment. He agreed with the claims and forwarded his opinions to the Minister for Finance at that time. Ten years later, in response to a request from Great Cape Company, he wrote to affirm the authenticity of the letter he wrote in 2001. This is the substance of the NDC government’s July 16, 2012 press conference.

It is informative to note that the NDC government has conducted several audits of Nana Akufo-Addo’s seven years in office as Minister of state but have not been able to impugn his integrity in public service.

Nana Akufo-Addo is indeed the only Attorney-General to successfully prosecute a cabinet colleague in 2001 on corruption charges.

The payments or settlements during the Mills’ Presidency have attracted much national anguish and condemnation because some of the payments, involving huge amounts, have been attended by clearly improper and buildering conduct, bordering on the fraudulence, as evidenced by the cases involving Mr. Woyome, C P, Africa Automobile Limited and Isofoton, among others.

The nation wants prosecution of those who have been delinquent and shown inexplicable conduct in safeguarding the monies of the people. The nation does not want propaganda smoke screens that are put out to confuse rather than to clarify possibly very serious crimes.