The race to build a flying electric taxi

For any commuter the prospect of being whisked to and from work in a fraction of the time it usually takes is pretty irresistible.

No traffic jams, no train delays and no cold platforms – what’s not to love?

This is the promise of more than a hundred companies developing electric vertical take-off and landing (eVTOL) aircraft.

Yet the dream seems to be some way off. Industry experts say that taxi services using such aircraft won’t be a mass-market phenomenon until the 2030s.

So what is the hold up?

Can they fly far enough?

There are good reasons why the eVTOL industry is focussing on short hops in and out of cities.

Most have batteries that can allow them to fly for around half an hour. In the case of Germany’s Volocopter this amounts to a range of about 22 miles (35km) with a maximum speed of around 68mph (110km/h).

On Tuesday it made a test flight over Singapore’s Marina Bay.

Other companies have boosted range by adding wings. So companies like Germany’s Lilium have an aircraft which can take off vertically but can also tilt its wings and engines and fly more like a regular plane. Lilium expects its aircraft to have a range of 185 miles (300km).

Vertical Aerospace in the UK is also working on eVTOL with wings that it hopes will fly more than 100 miles.

But the industry would still dearly love to see a breakthrough in battery technology which would make all these prototypes much more useful aircraft.

Where will you take off or land?

If you are planning an air taxi service then you are going to need somewhere convenient for your aircraft to take off or land, and also charge or swap their batteries – what the industry likes to call vertiports.

In big cities space is already limited. Heliports already exist but might not be ideally located or able to cope with extra traffic.

Some buildings might have suitable rooftops, but they are likely to be expensive to use.

Even if sites are identified, they would still need to comply with planning regulations, which don’t even exist yet.

The vision is for many landing pads in big cities

One of the big selling points of eVTOL aircraft is that they are relatively quiet. While hovering they should make just a quarter of the noise of a helicopter, according to Michael Cervenka, a senior executive at Vertical Aerospace.

And while flying forward “you wouldn’t hear them at all”, he says.

So that might ease the concerns of those living near a vertiport, but you could still imagine people objecting to a continuous stream of air traffic.

And just one accident might create widespread opposition to having landing zones in heavily populated areas.

How safe is safe?

Aviation regulators in Europe and the US are currently working out the standards they want these new aircraft to meet.

Once agreed an eVTOL aircraft is likely to go through years of testing before it meets them, a process likely to cost hundreds of millions of pounds.

“Most eVTOL manufacturers I have been talking to are trying to get certification by 2023,” says Darrell Swanson, who runs his own consultancy specialising in the eVTOL industry.

In their favour, electric aircraft are much simpler than helicopters or passenger jets, so mechanically there is much less to go wrong.

“We don’t need great big gear boxes and things like that,” says Steve Wright, an avionics expert, at the University of the West of England.

Several aircraft designs have multiple motors, so they can fly even if one motor fails.

Uber, which has an eVTOL project called Uber Air, says that flying taxi services only need to be safer than driving a car, perhaps twice as safe.

But the public and regulators might expect safety standards closer to those of airlines.

Another question that has not really been answered is how eVTOL aircraft will perform in bad weather.

To save weight they will be very light, which could make flying in windy conditions bumpy or dangerous.

Yet a taxi service that has to shut down on a windy day would not be much use in many places in the world.

Who will monitor these aircraft?

Many big cities have rivers running through the middle which – with no residents below – make ideal flight paths.

But if eVTOL is going to become a mass market transport system, with thousands of aircraft, then new airspace management systems will have to be put in place. 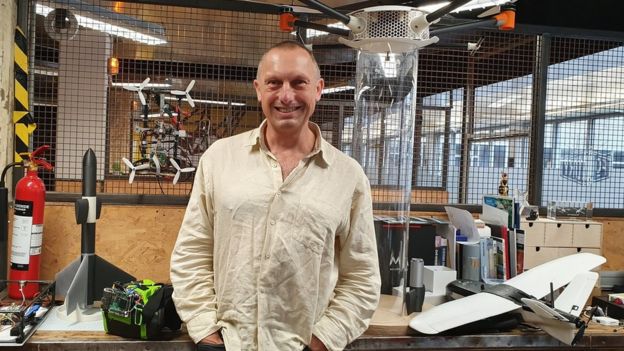 That will definitely be the case if the industry meets its eventual goal – aircraft without pilots.

Those aircraft themselves will need be able to sense what is going on around them and identify other aircraft.

“There’s going to be a slow build up of traffic over time and that will allow us to prove these systems work properly.”

What will it cost?

The business model of a flying taxi service is yet to be worked out. But it is likely that they will serve short, well-defined routes in and out of cities. 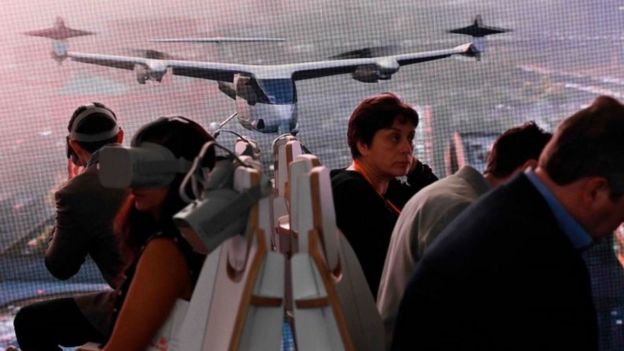 Uber Air believes that such services will become “an affordable form of daily transportation for the masses, even less expensive than owning a car.”

However, to begin with, such services will target richer customers who are prepared to pay a premium.

“It’s the same old story, there will be early adopters with lots of money who will pay over the odds,” says Mr Wright.

“The hop from the top of an expensive area in the City of London out to Heathrow or something like that would be incredibly valuable.”