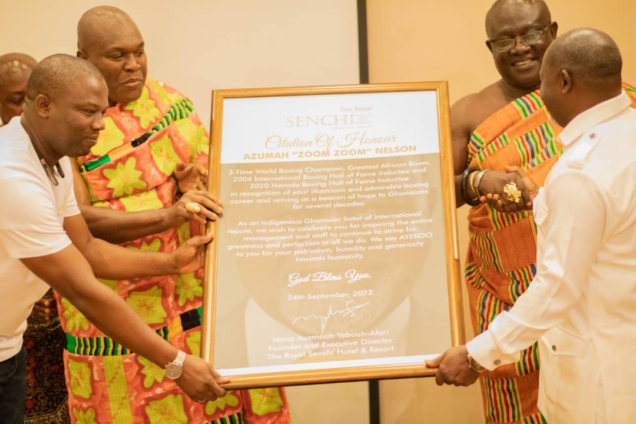 The ‘Greatest African Boxer’ was hosted at the resort over the weekend and was presented with a citation at a colourful event graced by the Akwamuhene, Odeneho Kwafo Akoto III.

The sportsman’s visit coincided with the hotel’s re-launching of its recreational state-of-the-art facilities including a golf driving range and a multipurpose lawn tennis court.

The recognition, according to the hotel, was to beam light on the boxing legend’s commitment to certain values which earned him enviable feats of global acclaim.

Those, the resort said, resonated with its set of values as a player in the service industry.

While on the visit, management of the hotel headed by the Executive Director, Nana Kwame Yeboah-Afari led Azumah Nelson and his team to the Bogyawe Palace where the sports icon was feted as a scion of Akwamu.

The boxer, who was in the company of his wife, Priscilla Nelson and manager, Yaw Sakyi Afari arrived at a euphoric royal reception at the palace.

Nana Yeboah-Afari, said he was inspired by Azumah’s dedication to duty and said he was a good example for people, especially those in the service industry.

He added that although society took pride in the patriotic efforts of people, very little was done to honour them, and that in effect hampered the quality of service for many.

Akwamuhene, Odeneho Kwafo Akoto III, was happy Azumah had traced his roots to Akwamu and praised him for his patriotism, which placed Ghana on the map.

The retired boxer was taken on a tour of the 35-acre property at the end of which he engaged the Akwamuhene in a friendly golf and lawn tennis contest to mark the reopening of the facilities.

He asked government to invest in infrastructure, training and management of boxers for the country to reclaim its past glory in boxing.

DISCLAIMER: The Views, Comments, Opinions, Contributions and Statements made by Readers and Contributors on this platform do not necessarily represent the views or policy of Multimedia Group Limited.
Tags:
Azumah Nelson
Royal Senchi Hotel