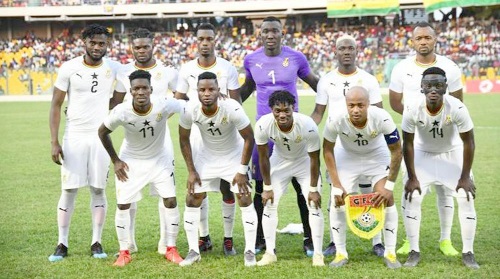 For up to the minute updates on trending stories and news, Twitter remains the social media platform that keeps you informed. This Week on Twitter #TwitterGhana captures the latest in music, movies, sports, entertainment and more you might have missed.

Ghana’s Black Stars suffered a shock Group stage exit from the African Cup of Nations (AFCON) after failing to win any of their three games in Cameroon. In a further upset during their final match on Tuesday against Comoros Islands, Ayew Andre received the first-ever red card of a #TeamGhana Captain at AFCON. This left the Black Stars with ten men for the rest of the match which they eventually lost 3-2.

As expected, this elimination received lots of reactions from football fans across the continent, including sports journalist Oti Adjei who Tweeted his disappointment.

Juliet Bawuah whose #AFCONwithJuliet Spaces have kept fans up to date on the latest AFCON commentary also Tweeted about the loss.

Sports channel 3SportsGh, asked fans in a Tweet if the red card was a fair call? What’s your take? Share your opinion using the hashtag #AFCON2021

Thomas Partey back in London after BlackStars exit AFCON

Thomas Partey picked up two yellow cards in less than ten minutes, in the latter stages of Arsenal’s 2-0 defeat against Liverpool! This follows his return to the Premier League side, after being called back by Arsenal manager Mikel Arteta, in the aftermath of Ghana’s exit from AFCON – marking a miserable week for the star midfielder. GhanaWeb confirmed his return to London as seen in this Tweet, but Partey will now miss Sunday’s clash with Burnley. Read all the comments about his return to Arsenal here.

KiDi’s ‘Touch it’ gets first global nominations at NAACP awards

Multiple award-winning artiste KiDi Music has earned his first international award nomination at the 2022 edition of the National Association for the Advancement of Colored People (NAACP) Awards, with his hit song ‘Touch it’. The song, which debuted on May 6, 2021, ahead of the release of his hotly anticipated second album, “The Golden Boy”, was nominated in the Outstanding International Song category. Here is a Tweet from NAAACP Image Award congratulating the outstanding nominees, and KiDi also acknowledging the nomination with a Tweet.

On Tuesday, people across Canada and the U.S. woke up to see billboards featuring Tweets from celebrities expressing hopes and dreams prior to their goals being achieved. Starting a thread with a Tweet captioned, “If you can dream it, Tweet It”, people on Twitter were encouraged to express their own dreams and goals. Taking a cue from the campaign, Ivy Barley, Ghanaian host of the popular tech-focused Spaces with Ivy, put out a Tweet expressing a desire to host Twitter CEO Parag Agrawal on one of her Spaces.

He responded with a Tweet affirming his interest, which received an overwhelmingly positive response! Follow the hashtag #TweetItIntoExistence for more wholesome and affirming Tweets.

Why Waakye Trended on Wednesday

#Waakye was trending on Wednesday after the French Ambassador to Ghana’s Twitter page Tweeted a photo of her buying a pack of the favourite dish at Makola. This was well received with some humorous reactions from popular Tweeters like Kaly Jay.