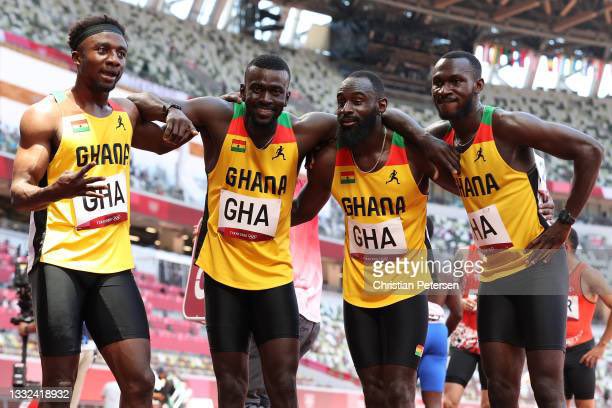 Ghana’s 4x100m men’s relay team booked a place in the final after qualifying as one of the ‘fastest losers’ with a time of 38.08s at the Tokyo Olympic Games.

The team in the process broke the national record which stood at 38.12s. The record was set at the 1997 World Championships in Greece by the quartet of Abu Duah, Eric Nkansah, Aziz Zakari and Emmanuel Tuffour.

The time Ghana needed to beat to reach the final in Tokyo was 38.18s from Heat 1.

Despite not finishing in the top three qualifying slots, Ghana’s 38.08s was fast enough to see them in the final.

Safo-Antwi started swiftly before handing over to Azamati, whose blistering burst kept Ghana in the running.

Yeboah was Ghana’s third leg and negotiated the bend pretty well before passing the baton to Amoah.

The Coppin State University raced into the mix before narrowly finishing fifth, ahead of USA.

China ended up first in Heat two and were joined by Italy, who had 100m champion Marcell Jacobs on their team. 200m champion Andre De Grasse helped Canada finish in third place.

Germany and Ghana had the fastest non-qualifying times and join the top three from Heat 2 in the final.