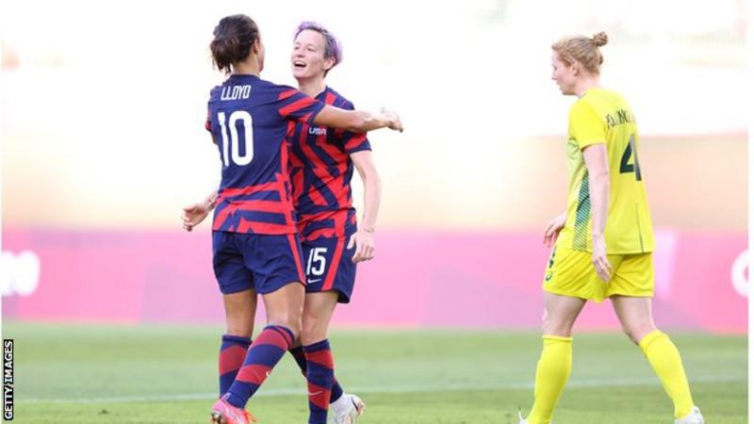 The result betters the USA's fifth-place finish at Rio 2016

The USA defeated Australia to win Olympic bronze in a seven-goal thriller at Tokyo’s Kashima Stadium.

Caitlin Foord’s goal and a late Emily Gielnik screamer threatened a comeback, but the USA held on for bronze.

It is not the medal match the USA, who were gold medal favourites, expected to be in but big stars in both teams stepped up to deliver an end-to-end contest, a far cry from their last meeting which ended 0-0 in the group stage.

The Matildas, who knocked out Team GB in the quarter-finals in a 4-3 undoing, enjoyed an equal share of the possession but, with veterans Rapinoe and Lloyd still in fine form, the USA had the better of Australia early doors.

Lloyd, who has 312 caps, scored either side of half-time, firstly with a pin-point strike into the bottom corner and secondly after Australian defender Alanna Kennedy headed the ball back towards her own goal to leave the striker in bags of space.

Kerr’s leveller was an immediate response to Rapinoe’s opener and Foord’s header came moments after Lloyd’s second goal, cutting the advantage to 4-2.

Defensively Australia were easily unpicked, but they were able to consistently put attacking pressure on the four-time Olympic champions.

Chelsea star Kerr was denied by the post as Australia threatened in the second half, before substitute Gielnik struck her pile-driver from range on 90 minutes, making for a nervous close to an entertaining match.

This is Australia’s best finish at an Olympics and the first time that either the men’s or women’s team have featured in a bronze medal match since 1992 – they will host the Women’s World Cup in 2023.

The gold medal match takes place on Friday, 6 August between Sweden and Canada.