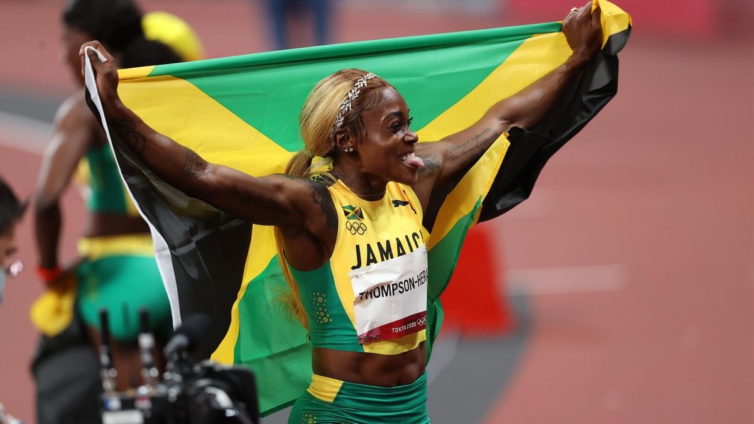 Elaine Thompson-Herah confirmed her place among the pantheon of sprint greats as she secured an unprecedented women’s 100m-200m double-double with a sensational victory over the longer distance in Tokyo.

The 29-year-old Jamaican surged home in 21.53 seconds, just 0.19 seconds off Florence Griffith-Joyner’s long-standing world record, to back up her individual golds from Rio 2016.

It is the second-fastest time in history.

Trailing in her draught, Namibian teenager Christine Mboma, who was barred from her favoured 400m two weeks before the Games on account of her naturally high testosterone levels, took silver in 21.81.

Griffith-Joyner’s 21.34-second mark, set in the final of the 1988 Games in Seoul, has long seemed unassailable. But Thomas’ 21.61 run in the US trials in June and Thompson-Herah, who became the second-fastest woman of all time over 100m on Saturday, have brought it back into view with the help of a high-tech track and carbon-stiffened spikes.

It may yet be Mboma who could finally claim the record however. Having only turned 18 in May, the Namibian had run only one 200m before this season, a pedestrian 25.05. But her awesome finishing speed swallowed up Jamaican great Shelly-Ann Fraser-Pryce and several others over the final 50m.

Work on her start and the new experience of running the bend could quickly bring her time lower quickly.

Thompson-Herah, Fraser-Pryce and 100m bronze medallist Shericka Jackson will attempt to make sure Jamaica go one better than their 4x100m silver from Rio in Friday’s relay final.