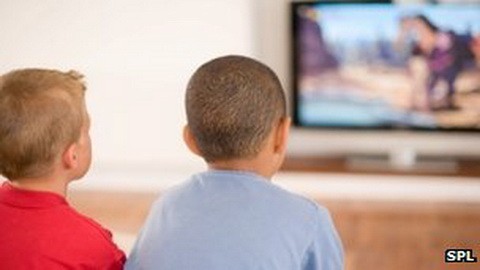 Children who increase the number of hours of weekly television they watch between the ages of two and four years old risk larger waistlines by age 10.

A Canadian study found that every extra weekly hour watched could add half a millimetre to their waist circumference and reduce muscle fitness.

The study, in a BioMed Central journal, tracked the TV habits of 1,314 children.

Experts say children should not watch more than two hours of TV a day.

Researchers found that the average amount of television watched by the children at the start of the study was 8.8 hours a week.

This increased on average by six hours over the next two years to reach 14.8 hours a week by the age of four-and-a-half.

Fifteen per cent of the children in the study were watching more than 18 hours per week by that age, according to their parents.

The study said the effect of 18 hours of television at 4.5 years of age would by the age of 10 result in an extra 7.6mm of waist because of the child’s TV habit.

As well as measuring waist circumference, the researchers also carried out a standing long jump test to measure each child’s muscular fitness and athletic ability.

An extra weekly hour of TV can decrease the distance a child is able to jump from standing by 0.36cm, the study said.

The researchers said that further research was needed to work out whether television watching is directly responsible for the health issues they observed.

Dr Linda Pagani, study co-author from the University of Montreal, said it was a warning about the factors which could lead to childhood obesity.

“The bottom line is that watching too much television – beyond the recommended amounts – is not good,” Dr Pagani said.

The American Academy of Pediatrics recommends that children aged over two should not watch more than two hours of television per day.

Dr Pagani added: “Across the occidental world, there have been dramatic increases in unhealthy weight for both children and adults in recent decades.

“Our standard of living has also changed in favour of more easily prepared, calorie-dense foods and sedentary practices.

“Watching more television not only displaces other forms of educational and active leisurely pursuits but also places them at risk of learning inaccurate information about proper eating.”

The study said that habits and behaviours became entrenched during childhood and these habits might affect attitudes to sporting activities in adulthood.