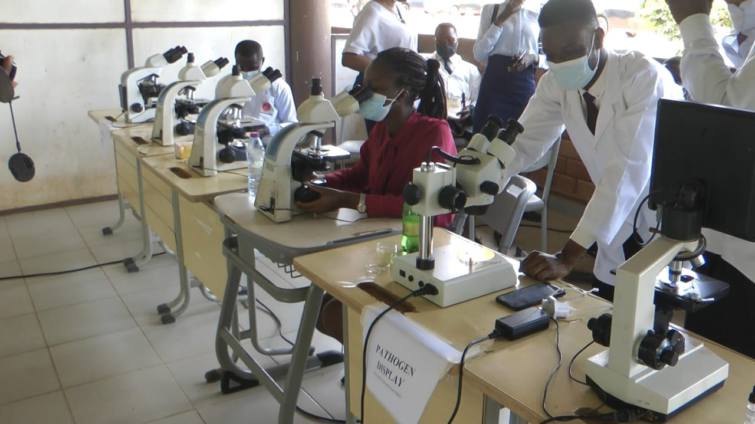 The Vice-Chancellor of the University of Energy and Natural Resource (UENR), Prof Elvis Asare-Bediako, has said the university is poised to build a multipurpose Science, Technology, Engineering and Mathematics (STEM) Centre.

When completed, the center, according to Prof Elvis Asare-Bediako, would carry out research and innovations of national and international interest to address the shortfall of scientists and engineers in the country. He therefore wants the government to assist them to put up the Centre.

He was speaking at the opening ceremony of the 5th UENR STEM festival at the University’s campus in Sunyani.

The three-day STEM festival, involves about 2,300 learners from primary, junior, and senior high schools in the Bono, Bono East, and Ahafo Regions, and brought together more than 8,000 learners since the University introduced it 5 years ago.

19 exhibitors from the Departments of Chemical Science, Applied Biology, Horticulture and Crop Production, Computer Science, and Informatics, among others, are involved.

This year’s festival, under the theme, “The role of STEM Education in combating the COVID-19 pandemic: The way forward for Ghana,” is expected to continue to motivate students, while encouraging parents to support their children to cultivate their science gifts by pursuing a STEM education at the tertiary levels.

The VC of UENR, Prof Elvis Asare-Bediako, said, “The centre would also organize short content-based training for teachers who handle science-related subjects in both JHS and SHS level”.

This, he believes, would provide for solid foundations in pupils who have the potential and wish to pursue STEM programmes in the University.

Prof Elvis Asare-Bediako noted the Centre, in collaboration with other Departments, will build potential science students into finished products to assist in the growth of this country.

The venture, he explained, is in support of the government’s agenda for STEM education.

“If we are permitted by GTEC/NAB and the Ministry of Education, we would run degree courses in STEM programmes to support the promotion of STEM education in the erstwhile Brong Ahafo Region and the northern sector of the country”, he said.

He, however, said the assistance of the government, through the Ministry of Education, is needed in putting up the Multi-purpose STEM Centre to achieve the vision.

The VC further said such assistance would be a tap on their shoulders for what they are already doing to support STEM education, which in itself is an indication of what they would have accomplished if they had such a center.

In a speech read on behalf of the sector Minister, Dr. Osei Yaw Adutwum, by Dr. Eric Nkansah, in-charge of tertiary education, he expressed his excitement seeing the young students exposed to STEM and congratulated the Management of the UENR for being the first University in Ghana to have organized a festival of this nature.

This kind of exposure for the youth, the Minister said, is consistent with the government programme of making STEM education a priority.

He explained that the theme aligns with the government’s commitment to making Ghana a vaccine manufacturing hub in the sub-region with the US$25 million seed funding for the establishment of a National Vaccine Institute, as announced by President Nana Akufo Addo.

Such emerging institutes, coupled with the government’s quest to accelerate the socio-economic transformation, Dr. Adutwum said, would require a concerted effort to increase the number of students in STEM-related fields, hence the President’s charge on the Ministry of Education to implement policies aimed at improving the sciences.

He further said the Ministry is committed to repositioning the educational system anchored on STEM and expected to empower Ghanaians for national development and become competitive in the Fourth Industrial Revolution.

Dr. Adutwum also said the Ministry of Education is building 11 model state-of-the-art STEM SHSs across the country, one each at Akrodie in Ahafo Region and Koase in the Bono East Region, equipped with 12 laboratories.

He urged the students to take the festival seriously and learn as much as they can from the exhibitions, assuring that the government will provide the necessary resources to train them into world-class scientists.

Fan Milk PLC, as a nutrition partner, presented bottles of their new products Nutriday, as their contribution to the festival to help refresh the minds of the learners.