Campaigners have accused the UK Home Office of a lack of "decency" after it emerged dozens of people deported to Commonwealth countries have not been contacted by the Windrush task force.

Ministers said "no specific attempt" had been made to approach 49 people deported to Ghana and Nigeria in 2017.

The Home Office says it is up to Commonwealth citizens to seek information about their status.

MPs said it showed the government had learned nothing from the scandal.

The Windrush scandal was uncovered earlier this year, after many people from Commonwealth countries who had legally lived in Britain for decades were wrongly classed as illegal immigrants and deported.

They had been encouraged by the UK government to settle in Britain from the late 1940s until 1973.

However, although they had been granted indefinite leave to remain in the UK, some immigrants did not have formal paperwork confirming their residency status.

It meant when the Home Office embarked on its so-called "hostile environment" policy designed to make staying in the UK more difficult, some Commonwealth immigrants were wrongly deported.

Their problems were compounded by a Home Office decision, in 2010, to destroy their landing cards – often the only record of their immigration status. 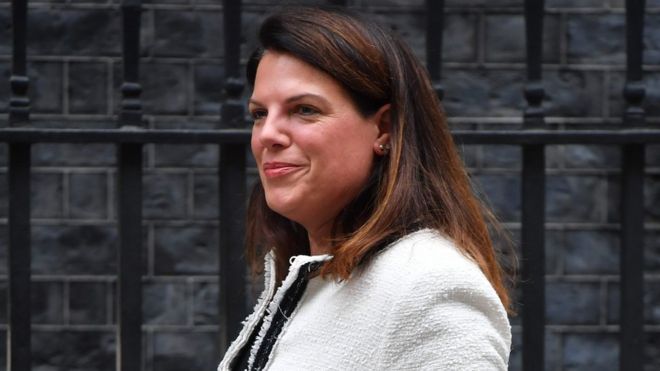 Following a public outcry, the government set up a task force to help people formalise their right to remain in the UK.

Thousands of people have now contacted the task force and received documents confirming their right to stay in Britain.

However, following parliamentary questions from Green Party MP Caroline Lucas, Home Office ministers now admit there are 49 people who have still not been informed by the government that the task force exists.

The 49 were deported to Ghana and Nigeria between March and September 2017 – before the Windrush scandal erupted.

"But this isn't a question of capacity alone, it's a question of decency, and yet another example of a department going out of its way to avoid doing the right thing.

"As a country surely we can do so much better than this."

Campaigner Zita Holbourne, who founded anti-austerity organisation Black Activists Rising Against Cuts and is the vice president of trade union PCS, called it "a disgrace".

Ms Lucas, who is MP for Brighton Pavilion, said: "It doesn't seem much to ask for the government to tell people they've kicked out of the country that the Windrush task force exists.

"Ministers know their treatment of the Windrush generation is a national disgrace. That they haven't bothered to contact people who've been deported suggests the government hasn't learned anything from the public backlash against their hostile environment."

"People from almost every Commonwealth country have been treated badly under this Government's hostile environment," she said. "It's clear these injustices will continue if ministers don't even know what's going on."

Liberal Democrat home affairs spokesman Ed Davey said anyone who may have been wrongly deported should be contacted and told how to apply to return and receive compensation.

"In these cases, the Home Office seems to be waiting around for people to contact them – even though they may not have the means or information to do so. That's an utter disgrace."

Home Office minister Ms Nokes, in her written ministerial answer to Ms Lucas' question, said: "The Home Office has not made a specific attempt to inform those 49 people of the Windrush taskforce.

"The Home Office announcements relating to Commonwealth citizens can be found at www.gov.uk/windrush.

"Assistance is also available through the Windrush Taskforce helpline on freephone 0800678 1925 or by email at commonwealthtaskforce@homeoffice.gsi.gov.uk."

A Home Office spokesman said: "Any individual who believes they are protected under the provisions of the 1971 Immigration Act is able to contact the Windrush Taskforce, who will help to identify their current status.

"We have always been clear that the Windrush Scheme is not restricted to the Windrush generation or people from the Caribbean, but it is right that applicants for citizenship need to satisfy the good character and residence requirements."