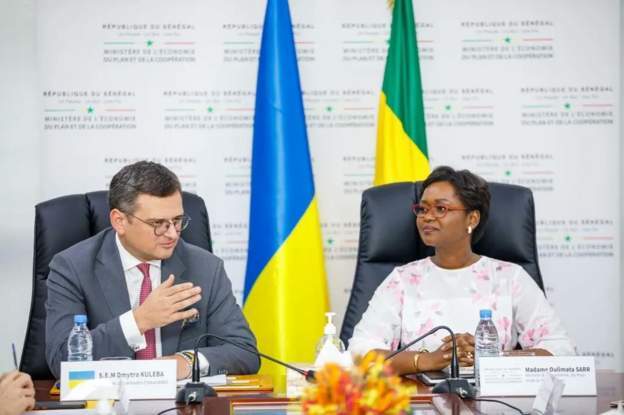 Ukraine Foreign Minister Dmytro Kuleba faces an uphill battle to gain Africa’s support in the war against Russia, as leaders in the continent shrug off pressure to distance themselves from Vladimir Putin. Mr Kuleba’s inaugural visit to the region has so far received less public and media attention than that of his Russian counterpart Sergei Lavrov in July.

Mr Kuleba said the 10-day African tour was aimed at establishing a mutually beneficial “Ukrainian-African renaissance” amid contesting narratives in the wake of Russia’s invasion of Ukraine in late February.

He began his tour in Senegal on Tuesday, where he met President Macky Sall, who is the current chairperson of the African Union (AU), and Foreign Minister Aissata Tall Sall. The two countries signed bilateral co-operation deals in trade, agriculture and other sectors.

Mr Kuleba arrived in Ivory Coast on Wednesday for meetings with officials and business leaders.

Russian diplomats in Africa have sustained a prominent media and public presence as Moscow faces a global backlash over the war that has precipitated a global food crisis.

However, in an op-ed published by South Africa’s Daily Maverick website on Sunday, former Botswana President Ian Khama urged the continent to back Ukraine as “people in the developing world, in Africa and Asia, are now suffering as a result of what the Russians have done”.

Shortly before Mr Lavrov’s Africa tour, newspapers in Egypt, Congo,-Brazzaville, Uganda and Ethiopia published an op-ed he wrote blaming the West for the food crisis.

The Russian official used his presence on the continent to play up the Kremlin’s strength in the wake of apparent battlefield losses in Ukraine. Plans are under way for a second Russia-Africa summit in Ethiopia next year to reinforce relations.

The West has been criticised for pressuring African countries to condemn Russia. South Africa and Zimbabwe have urged the continent to reject plans by the US to punish countries sympathetic to Russia.

Russian involvement – particularly through mercenaries from the Wagner group in Sudan, Libya, the Central African Republic and more recently Mali – raises fears of further destabilisation as some countries unwittingly become pawns in the Kremlin’s quest for influence.

DISCLAIMER: The Views, Comments, Opinions, Contributions and Statements made by Readers and Contributors on this platform do not necessarily represent the views or policy of Multimedia Group Limited.
Tags:
Ukraine