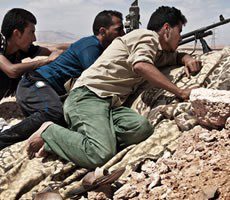 The United Nations has warned villagers in South Sudan to flee from advancing fighters from a rival ethnic group.

Fighters from the Lou Nuer ethnic group are pursuing members of the Murle group, reports say, as a deadly vendetta over cattle raiding continues.

Tens of thousands of Murle fled the town of Pibor after it came under attack from the Lou Nuer on Saturday.

The BBC’s East Africa correspondent Will Ross says some Lou Nuer fighters remain in Pibor but many have left.

About 1,000 people have been killed in recent months as reprisal attacks over cattle raids have escalated.

A spokeswoman for the United Nations mission in South Sudan told the BBC that “several flanks of the attackers have moved in a south-easterly direction [from Pibor], almost certainly looking for cattle”.

The spokeswoman, Lise Grande, said they were burning huts as they moved.

She said troops from the South Sudanese army, backed by several hundred UN soldiers, had held the main part of Pibor as it came under attack from the Lou Nuer, but that a clinic belonging to the charity Medecins Sans Frontieres (MSF) had been “overtaken”.

Ms Grande said the UN was tracking the movement of the Lou Nuer and warning others in their path to “disperse into the bush for their safety”.
‘Reinforcements sent’

The BBC’s East Africa correspondent, Will Ross, said a witness in central Pibor told him some Lou Nuer fighters were still in parts of the town.

Our correspondent said many of the Lou Nuer were now believed to be in pursuit of the Murle who had fled Pibor.

The BBC has learnt that some of the displaced – mainly women, children and the elderly – have been killed although it has not been possible to verify how many.

South Sudan’s President Salva Kiir has called on the Lou Nuer to stop their advance and return to their traditional areas.

The government said it was deploying more troops and an additional 2,000 police to Pibor.