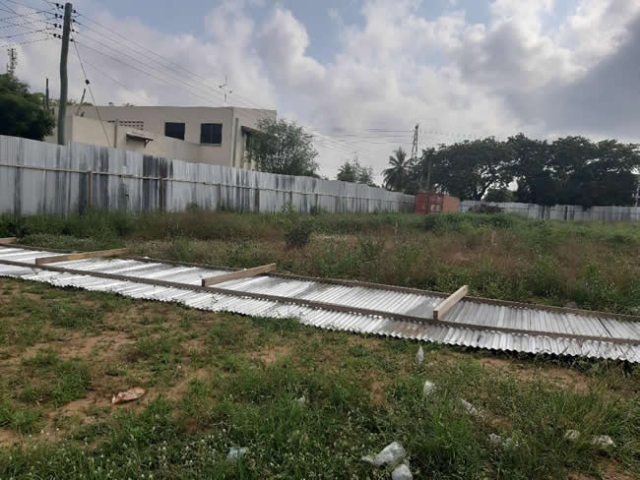 The Tema Metropolitan Education Directorate may have to operate under a tree soon after overstaying its welcome in a temporal accommodation while a fit for purpose office complex is yet to materialise.

The Directorate is virtually squatting at the premises of the TDC Development Corporation which had temporarily housed it and other state agencies for several years.

But the TDC in its quest to develop the land had asked all the agencies to vacate the premises after donating a parcel of land to the Education Directorate to build its own office.

Five months after the Tema Metropolitan Assembly (TMA) cut the sod for the construction of the office complex, there was nothing to show on the land located between Egyesek Library and the Tema Regional office of the Electricity Company of Ghana (ECG).

The land, which was to hold the office complex within nine-calendar months, could only boast of overgrown weeds and tree stumps instead of a two-storey building containing 28 offices including the Metropolitan Director’s office, 33 water closet toilets, an ICT Centre and a conference hall.

When the Ghana News Agency visited the site, there was no structure there even though five months had already gone by.

Mr Felix Mensah Nii Anang-La, Tema Metropolitan Assembly (TMA), when cutting the sod for commencement of work on June 4, 2019, promised that the office building would be fully functional in nine calendar months.

Part of the corrugated roofing sheets that had been used to cordon off the place had fallen off near the entrance of the Tema Metropolitan Department of Agriculture’s office.

Apart from a container positioned at a corner by the contractor, the place was empty, dry and abandoned.

The Ghana News Agency gathered that the contractor, FORAC Company Limited was yet to be given mobilization funds by the TMA.

Meanwhile, with exception of the Magistrate Court, and the Education Directorate, all other state institutions including the Social Welfare Department, Survey Department, Lands Commission and the Electoral Commission had already vacated the prime area.

The Education Directorate needs about 13 rooms to accommodate all its units to effectively oversee the over 300 schools, 88,421 students and the 4,571 teachers in the Tema Metropolis.

Information gathered from the Directorate indicated that the TDC and TMA offered some inadequate office space and some rooms at the Oninku Drive School respectively, to accommodate the education officials.

The said buildings, apart from not having enough rooms, the GNA gathered, also lacked security features to effectively protect sensitive documents of the Directorate.

Mr Frank Asante, Tema Metropolitan Public Relations Officer, responding to the issues, said the contractor had put in his request for mobilization funds noting that his documents were currently with Works Department for fine-tuning.

He also indicated that the TMA was collaborating with the TDC to find a suitable temporal accommodation for the Education Directorate to operate from.