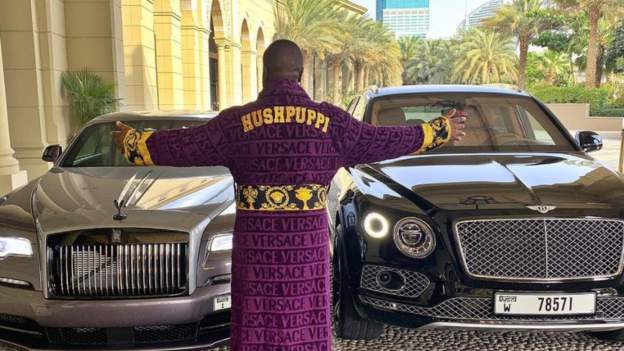 The Nigerian influencer built up huge following on Instagram

The US government has dismissed as fake the reports that the detained Nigerian influencer Ramon Abbas, known as Hushpuppi, executed a $400,000 (£304,000) internet fraud from prison.

Hushpuppi, 37, was arrested in the United Arab Emirates in 2020 for crimes that cost victims almost $24m, and is currently in a US jail awaiting sentencing having pleaded guilty to money laundering.

On Thursday, a document emerged on social media claiming that the FBI filed new evidence against Hushpuppi on Wednesday for defrauding Americans using prison internet facilities.

It is not clear where the document originated from yet it has gone viral on Twitter and been reported by many news organisations.

However an official of the US Department of Justice told the BBC that the US Attorney’s Office in Los Angeles, which filed the case against Hushpuppi, has not filed any such document.

“The document appears to have been fabricated… We have checked with the FBI who supposedly authored the document, and they confirm it is a fake,” an official said.

Hushpuppi is known for posting photos of his lavish lifestyle on Instagram, where he has 2.5m followers. In one scheme, Hushpuppi attempted to steal more than $1.1m from someone who wanted to fund a new children’s school in Qatar, court documents said.