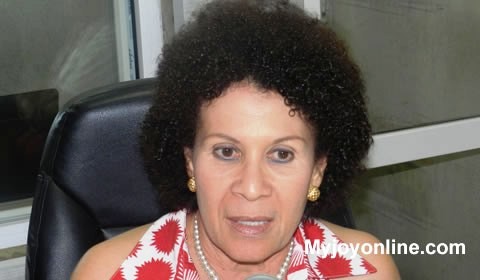 She called her husband a “true patriot” who believes in the nobility of service and feels compelled to give back to society because he has enjoyed personal success.

She explained that his principles include selecting experts rather than MPs for ministerial positions and free, compulsory, quality education from kindergarten through senior high school. Mrs. Nduom said that at the tender age of four or five years old, children’s minds are more malleable, and entering school during those years leads to improved performance throughout a child’s education.

Free compulsory education is mandated by the constitution, she said, but it has not been instituted. Meanwhile, she says, the failure rates of students sitting the Basic Education Certificate Examination (BECE) is so high that free senior high school, a popular campaign platform of the New Patriotic Party, could benefit as few as 20% of students.

She spoke optimistically about the PPP’s new campaign message, maintaining that no party has votes in the bank, but rather all parties enter the elections with zero percent of the vote.

While she said that this message has been resonating with voters, she added that she is worried that the PPP adopted the message too late for it to reach many of Ghana’s voters.

However, she said, Ghana’s democracy is too young to settle on the NDC and the NPP as its only viable parties, adding that the US is unhappily stuck with a two-party system. She called Ghanaians lucky to have an alternative in the form of the PPP.

She added that her husband believes in an all-inclusive coalition government, one in which the opposition party does not sit on the side and watch the governing party fail.

Speaking for herself, she said that Ghana is not a progressive country when it comes to issues of both gender and governance. She explained that only 10% of Parliamentarians are women and called Ghana’s government an “elected dictatorship,” in which a single individual is tasked with finding appointees for an incredibly wide range of official positions.

Finally, she announced that her son has organized a concert tonight, at 7 pm on Tuesday, which aims to benefit youth employment and publicize the PPP. The concert will take place at the Obra Spot at the Kwame Nkrumah Circle.