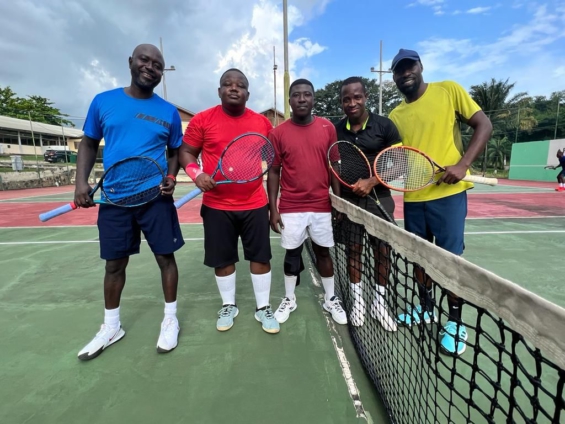 VRA Tennis Club and 4 Garrisons Tennis Club of Kumasi renewed their rivalry on November 12 at the Akosombo tennis club. And after a intense first leg in Kumasi on May 1 both clubs were poised to go to all lengths to win.

The encounter started with the men’s singles contest where Paa Kofi Grant of VRA outwitted coach Acquah of 4 Garrisons by 7-3, raising the hopes of the hosts. But once again, 4 Garrisons showed their superiority in singles by leading VRA 3 matches to 2, after a singles match decider where Thomas Ohene (Octopus) of Garrison beat Isaac Teiyo Narh of VRA 7-5.

“The VRA Tennis Club never disappoints in doubles”, an acclaimed belief by members of the VRA Tennis Club was ignited, and indeed they lived up to the expectations of their teeming supporters who thronged to the tennis court.

The Akosombo fans could not hold back their joy after last point – invading the tennis court to carry their players shoulder-high in jubilation. There was the presentation of prizes to deserving winners and the exchange of pleasantries by both club chairmen.

Other scores are below:

DISCLAIMER: The Views, Comments, Opinions, Contributions and Statements made by Readers and Contributors on this platform do not necessarily represent the views or policy of Multimedia Group Limited.
Tags:
4 Garrisons Tennis Club
VRA Tennis Club