Wakanda One City of Return Trade Expo ends on a high note - MyJoyOnline.com 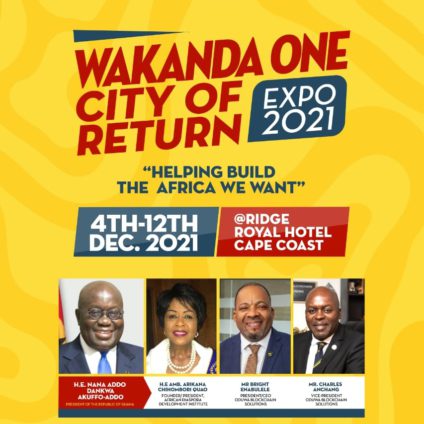 Some prominent leaders of African descent from the US, U.K, China, the Caribbean Islands, and Continental Africa have met in Ghana, Cape Coast for the Wakanda One City of Return Trade Expo.

The event which was held at the Ridge Royal Hotel in Cape Coast was sponsored by Oduwacoin, the only African Blockchain Solution provider.

Wakanda One City of Return Trade Expo, according to its sponsors, the Genesis of Africa’s Economic Revolution. It was held from December 3 to December 11, 2021, and Oduwacoin was for the first time able to bring on board independent leaders of African descent from the US, UK. China, the Caribbean Islands, and Africa as one people.

Organisers of the event succeeded in staying in tune with their mission to bring people of African descent together to empower them through trade and technology.

The last time this happened was in 1963 when the Organization of African Unity was created. Ghana, home to Kwame Nkrumah was an amazing host especially Cape Coast.

It is likely that Ghana is becoming the gateway to the African Diaspora coming back to Africa. The African Diaspora Development Institute team led by H.E Ambassador Dr Arikana Chihombori Quao and Prof. PLO Lumumba the organic voices for people of African descent showed up and made the event spectacular in value.

Participants lauded Nana Obokese Ampah of Asebu State highly for being the catalyst to the event. Oduwacoin is proving without any doubt that it is definitely the first Pan-African Crypto with a message for Africa.