WCQ: England lucky to escape with a point against Slovenia 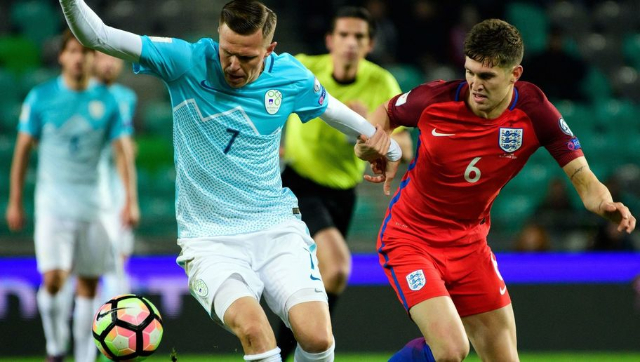 England disappointingly drew 0-0 away to Slovenia on Tuesday night, failing to keep up their 100% start to their 2018 World Cup qualifying campaign, although goalkeeper Joe Hart making a string of impressive saves.

The Three Lions were second best on the night and they somehow managed to hold on for a point, despite the hosts missing some excellent chances.

Slovenia twice failed to capitalise on sloppy England passing, with both Eric Dier and Jordan Henderson playing the ball straight into the path of Roman Bezjak and Josip Ilicic respectively. On both occasions, Hart was able to rush off his line and smother any danger.

The hosts came very close to taking the lead in the first half, when Jasmin Kurtic rattled the post, with a low curling effort.

Man of the match Hart produced his best save when licic flicked a header towards goal from a corner, forcing the England goalkeeper to claw the ball off the line and onto the crossbar.

England had started the game brightly, with Daniel Sturridge latching onto a lovely through ball from Dele Alli, only to be denied from close range by Slovenian goalkeeper Jan Oblak. During the second half, Jesse Lingard produced a driven effort on goal, which forced Oblak to parry the ball out for a corner.

Danny Rose wasted his side's best chance of the night, collecting a cross field pass from Gary Cahill, cutting inside onto his right foot inside the penalty area, but the defender screwed his effort wide.

Andros Townsend, Wayne Rooney, and Marcus Rashford were thrown on in search of a winner, but the Three Lions still struggled to create any real goalscoring opportunities.

Gareth Southgate's men had a shout for a penalty turned down during the first half. Sturridge produced a deft flick and turn of pace to drive into the penalty area, who was blocked off by Rene Krhin, but the referee, Deniz Aytekin was unmoved.

Southgate made two changes to the side that defeated Malta 2-0 at the weekend, with Eric Dier replacing Wayne Rooney and Danny Rose coming in for the injured Ryan Bertrand. Jordan Henderson captained the Three Lions in place of the dropped Rooney.

England's next qualifying match comes next month against fierce rivals Scotland at Wembley, who lost 3-0 on Tuesday away to Slovakia.