We can’t live in a world where dogs eat children 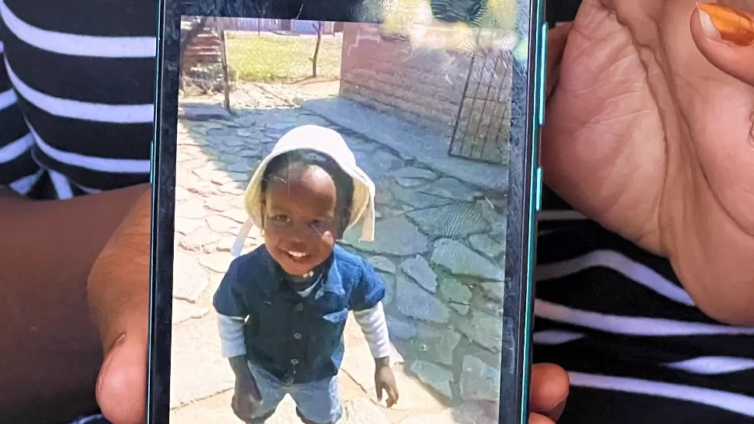 Warning: Some readers may find details in this story distressing.

They came from a three-year-old boy as he was attacked and then mauled to death by two American pit bull terriers.

The toddler had been outside with friends in a neighbour’s gated front yard, where the two pit bulls were usually tied up in a cage. But that morning they were loose and roaming around.

It was as the children were playing that the dogs pounced on Keketso Saule.

“Had someone not pulled him away the dogs would have finished [eating] him,” his distraught aunt, Nthabeleng Saule, told the BBC.

“One side his face was gone and you could see his brain.”

A video taken during the attack shows horrified relatives and neighbours shouting in shock and looking on at the vicious dogs unsure of what to do and how to intervene.

It was only when someone poured hot water on the dogs that people were able to drag Keketso’s lifeless body away from them.

In a groundswell of anger, the crowd, who had rushed to the scene, turned on the dogs and began throwing things at them.

They managed to stun and catch one, setting it alight.

The police then arrived as the community bayed for revenge, and the 21-year-old owner of the dogs, Lebohang Pali, was arrested and charged with keeping dangerous dogs and could face a fine or a jail term of up to two years or both.

The second dog was taken away and euthanised by the animal welfare group SPCA.

When we visited the neighbourhood in Free State province, about 250km (155 miles) south-west of Johannesburg, the charred remains on the street outside the Saule family home told of the grisly weekend scenes.

Rocks, sticks and a burnt-out tyre littered the area where the dog had been burnt. Residents came out to speak of their shock and anger about what they witnessed on Sunday.

“This incident has broken our hearts,” said Emily Moerane, a young mother carrying her toddler.

“We don’t want pit bulls any more,” she said, adding that if the owner of the dog did not face justice they would “take the law into our hands”.

Inside the Saule home, Kekesto’s aunt showed us a photo of the smiling bright-eyed little boy on her phone.

Battling to hold back the tears, she spoke of the family’s trauma.

“Things are just not right, not right at all. Even the child’s mother, grandmother and grandfather witnessed what happened,” she said.

“It’s going to take time for them to understand why they [the dogs] ate the child.”

One of the onlookers outside told me that there was another pit bull on the street, pointing to a house directly opposite the Saule home.

The dog’s owner, Mokete Selebano, welcomed me and took me out to his backyard, his brown pit bull playfully jumping on him and his wife.

But fearful of the community’s animosity towards pit bulls, Mr Selebano said he was going to give up his pet.

“We can’t live like this in a world where dogs eat children. If the community is angry then there’s nothing that I can do. But seeing him go is very painful to me and my wife.”

Following a recent spate of deadly pit bull attacks, many people like Mr Selebano have been voluntarily surrendering their dogs.

Three days after Kekesto’s death, a 15-month-old toddler died in hospital after being attacked by a pit bull in the Eastern Cape province.

In Bloemfontein, 49 pit pulls were handed over to the SPCA after eight-year-old boy Olebogeng Mosime was killed by one the week before.

On the same day Kekesto died, a girl was attacked by three pit bulls in Cape Town. She was injured and rushed to hospital, and the community turned on the animals, stoning them and setting them alight.

The dogs handed over to the SPCA will all be individually assessed and the organisation has appealed to the government for help in dealing with the influx.

The non-profit group Animals 24-7 has a log of fatal dog attacks reported in the South African media since 2004. With the two deaths this week, which are yet to be included in its list, it will bring its total number of deaths by pit bulls to 37 over the last 18 years.

Eighteen of the victims were children – five of whom have been killed this year, making it the worst on record for child deaths.

Four child deaths were reported in 2017, the worst recorded year since 2004 with eight fatalities in total – and since 2016 at least one death by a pit bull has been reported every year.

According to law firm DSC Attorneys, which handles personal injury cases, incidents involving dogs are on the rise.

“We have had over 70 dog bite-related queries this year to date – so an average of six per month – and in October alone we had 50% more enquiries than the preceding month,” the firm’s director Kirstie Halsam told the BBC.

The killing of 10-year-old Storm Nuku by his family’s two pet pit bulls in September prompted the Sizwe Kupelo Foundation to start an online petition calling for the dogs to be banned as pets in South Africa.

“The defence by pit bull lovers that it is how you raise the dog does not hold water. So many people, including joggers have been attacked and killed by pit bulls,” says the petition, which has more than 129,000 signatures so far.

“It is time that the South African government takes decisive steps and impose a complete ban on the ownership of pit bulls as domestic animals.”

Fear of crime is felt to be a major factor in training animals like pit bulls to be guard dogs. Mr Selebano, who got Junior as protection for his wife when she was alone at home, says there are many pit bulls in Phomolong township.

The increase in pit bull ownership, particularly in townships, is not only for protection but for illegal dog fighting.

The animals are trained to be aggressive, kept in tight enclosures on chains for the sole purpose of fighting and killing each other. Often organised by syndicates, people pay to watch and gamble on the fights.

In July, the SPCA busted a dog-fighting ring in Cape Town’s Grassy Park, rescuing seven dogs, including three pit bull puppies, after authorities became aware of a video of dogs being encouraged to fight.

Dog fighting carries a penalty of $4,700-fine or imprisonment of up to two years or both.

“Backyard breeding” has also become a problem – with owners cross-breeding pit bulls with other breeds like Boerboels for illegal dog fights.

This means the dogs may look like American pit bull terriers but are more aggressive and more prone to bite people, particularly children.

Critics of an outright ban on pit bulls say it will not solve the problem of irresponsible ownership.

“These maulings are nothing short of tragic,” Lins Rautenbach, spokesperson for the Pitbull Federation of South Africa, told the BBC.

But she put the blame squarely with the dogs’ owners – saying laws need to be put in place to deal with them.

“Banning the breed means people in South Africa who want to feel safe will move from this to another breed.

“So we’ll maybe see a drop in pit bull maulings, but we’ll see an increase in say Rottweiler or German Shepherd maulings,” she said.

DISCLAIMER: The Views, Comments, Opinions, Contributions and Statements made by Readers and Contributors on this platform do not necessarily represent the views or policy of Multimedia Group Limited.
Tags:
Pit bull attack
South Africa