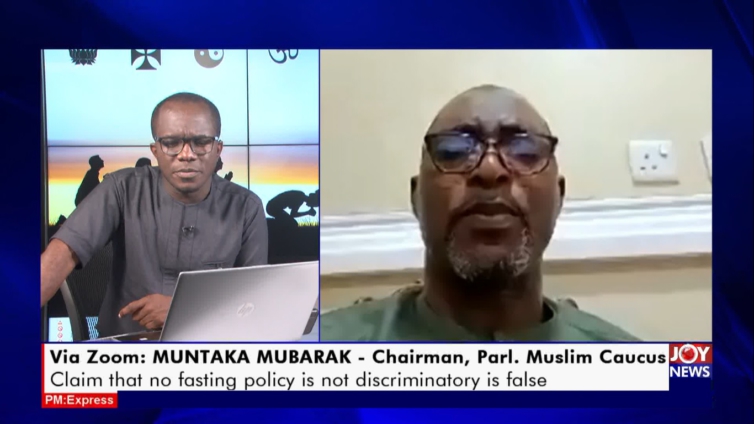 The Muslim Caucus in Parliament is calling for cool heads among the Muslim community as it senses rising tempers over Wesley Girls’ High School’s decision not to allow Muslim students to fast.

According to the Chairman of the Caucus, Mohammed Mubarak Muntaka, dialogue is the way to go in getting the impasse resolved.

He told Evans Mensah, host of JoyNews’ PM Express on Monday, that the Catholic Bishops’ Conference and the Christian Council’s support for the Methodist Church and Wesley Girls’ SHS authorities, exacerbated the anger among Muslims, especially the youth.

“I want to plead with the Muslim community, especially the youth. You monitor social media and the language, I have to say, is worrying, but please, what dialogue cannot resolve, believe me, even war cannot resolve it. All of us must resort to dialogue.”

“Let’s try to cool the temperature in our country. It is not helpful at all. Unfortunately, the Catholic Bishops’ Conference and Christian Council have exacerbated the situation, but we believe that all of us should remain calm,” he urged.

The ‘no fasting’ policy at the Wesley Girls SHS came into the limelight when an angry parent went to the institution to withdraw his daughter in protest of the School’s decision.

This issue turned into a controversial debate on religious tolerance in mission schools across the country.

The Methodist Church jumped to the defense of the School, arguing that the policy was strictly based on health and not religious grounds. It further argued that it had been the school’s policy for years.

But Chairman of the Muslim Caucus in Parliament described the claims as untrue and an affront to the peace and harmony among various religious bodies in the country.

The Asawase MP further vowed not to allow any religious leader to plunge the country into chaos.

“We won’t allow any Imam or pastor to cause the country to degenerate into chaos. This is a country for you and me. We must speak out. We won’t allow bigotry, whether coming from the Christian, Muslim, Buddhist or any other community. We are a unitary state and we all subscribe to the 1992 Constitution. Let’s respect it” he said.

In a press statement issued by the Muslim Caucus in Parliament of Ghana and Muslim stakeholders under the
leadership of the National Chief Imam, Usman Nuhu Sharubutu, Muslims were advised to remain calm.

The Caucus said it would “shortly advise all Muslims in Ghana on the right course of action that will help protect and safeguard the rights of Muslims and Muslim students.”

The group further called on the Education Ministry and Ghana Education Service to strictly enforce the directive to allow students who wish to fast for any religious reasons to do so.