Why fans are proud of Argentina despite losing World Cup final to Germany - MyJoyOnline.com 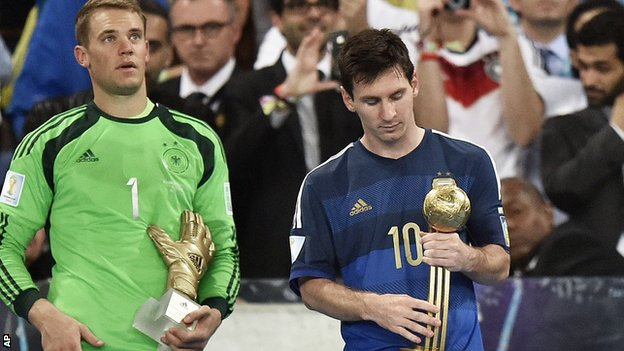 Despite losing the final of the World Cup, the general feeling (sadness aside) is that of immense pride. While 28 years ( 32 come Russia 2018) have passed since Argentina lifted the trophy, many are proud of this team.

Proud because this is the country’s best showing at the tournament since reaching the same stage in 1990. To lose (after 120 minutes) against the best German team of recent generations, after having played 120 minutes against Switzerland and another 120 minutes versus the Netherlands which was followed by yet another 120 minutes in the final, there’s no shame in that.

It was much better than their performance against Germany in 2010, where they were thrashed 4-0 in the quarter-finals, and an even better performance than that of 2006 where they lost on penalty kicks.

The future world champions were leading 5-0 at half time against Brazil in the semi-finals and were able to take their foot off the pedal and rest for the second half.  An extra day’s rest while Argentina were pushed to the limit against the Netherlands didn’t hurt the Germans either.

The above may sound like excuses, but they aren’t. It’s merely me being proud of the team I support for being able to reach the final, while having to go the distance on more than one occasion. And to only lose by a single goal against this German machine which easily swept aside Brazil is no easy feat.

Defeated: Lionel Messi after the final of the World Cup. (Picture: Reuters)

That’s not to say Argentina didn’t have their chances because they did. Gonzalo Higuain and Rodrigo Palacio will both be having nightmares for their incredible misses and Lionel Messi had a chance early in the second half which I’m sure he would like to have back.

For Messi, this was his chance to fully cement himself on the international scene. And while his country didn’t win the World Cup, it wasn’t for his lack of efforts. Messi was forced to be the playmaker of the team (which became more difficult in the absence of Angel di Maria) and the goal scorer as Gonzalo Higuain, Sergio Aguero, Rodrigo Palacio and Ezequiel Lavezzi combined for a grand total of one strike in the tournament.

For a country who could boast arguably the best forwards heading into the World Cup, it was their supposedly weak back line which kept them in matches. Marcos Rojo, seen as the main weak link in the line of four, was arguably the best left back of the tournament. Ezequiel Garay looked like a veteran out there and Pablo Zabaleta was a real warrior and got better as the tournament progressed. Not to forget Martin Demichelis, who slotted in beside Garay and did a more than admirable job.

The team fought until the very end. They gave it their all and left it all on the pitch. As a fan, you can’t ask more from your team.