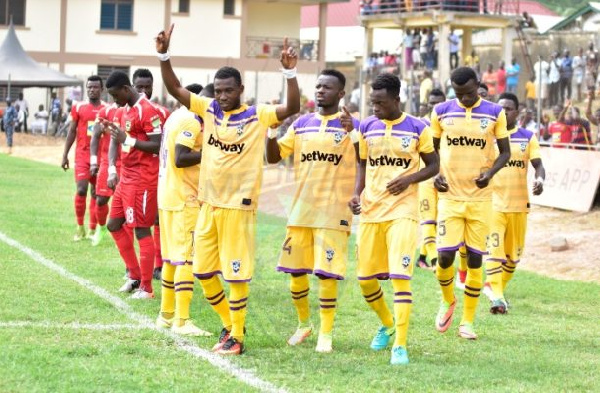 Special places in the country are blessed with special resources. In the Ashanti region, gold, cocoa and kola nuts are in abundance.

The same can be said in Tarkwa, a town found in the Western Region of Ghana. People of Tarkwa can boast of gold and manganese, two essential and rare minerals in the world.

To be fair, the Mauve and Yellows have been in existence for just 18 years. During this short period, they have won the FA Cup on two occasions (2013, 2015) and the Ghana Super Cup once (2015). However, the Ghana Premier League title has eluded them on multiple occasions.

In the truncated 2018 season, the Tarkwa-based outfit were on top of the league with 14 matches played. Two years later, they were four points away from league leaders Aduana in another season that was cut short.

With the emergence of a new season, Medeama, who are one of the favorites to take home the ultimate, will be aiming to live up to expectations.

Improvements from the transfer market

After the transfer window opened, all Ghana Premier League clubs started hunting for new additions. Medeama did same and added six names to their ranks.

Frank Boateng was one of their most exciting additions. The former AshantiGold shot stopper provided stability for the Miners in the last three years. He was part of the squad that clinched the NC Special Competition Tier 2 trophy in 2019.

Despite having a capable goalkeeper in Eric Ofori Antwi, Boateng’s quality in between the sticks may take the two-time FA cup winners to the next level.

Former Asante Kotoko left-back, Patrick Yeboah, was also acquired by the Tarkwa-based side. The 26-year-old terminated his contract with the Porcupine Warriors earlier this year and Medeama quickly took advantage of the opportunity.

With Bright Enchill at left-back already, Medeama have healthy and quality competition in that area.

Also, Medeama announced the addition of former Eleven Wonders maestro Godfred Kwadwo Asamoah ahead of the upcoming season. He is a highly rated prospect who was a regular fixture for Sure Wonders last season.

In attack, they added Mohammed Abass who will be having his second spell. Abass was a key player during his first spell but injuries saw his time at Asante Kotoko become unsuccessful.

However, his return to the Tarkwa-based outfit is seen as a boost as he has experience at the top level. He will be looked upon to fill the huge boots left by Prince Opoku Agyemang who was loaned out to South African side Cape Town City in the summer transfer window.

Medeama also lost super substitute Nana Kofi Babil to Austrian side SCR Altach but they have invested well ahead of the new campaign.

A long summer tussle with Kotoko for Justice Blay finally came to an end with Medeama coming out victors. They will keep the 28-year-old for at least another season which is a huge boost for the club.

It is no surprise that the Porcupine Warriors were so desperate to take the midfield enforcer back after his initial loan. Blay was one of the best performers in the league last season and earned some praise from Black Stars coach Charles Kwablan Akonnor.

“…somebody like (Justice) Blay, he looks active, when he’s playing he looks hungry, I like people who are hungry and want to be successful, it is not just one match or two matches,” Akonnor told the GFA media earlier this year.

Medeama now have arguably the best and deepest midfield options going into the new campaign.

There has been a preconception that successful teams in the Ghana Premier League are usually strong at home. The last three full seasons have backed that claim.

Ashanti Gold, Legon Cities formerly known as Wa All Stars and Aduana Stars were winners of the 2015, 2016 and 2017 league seasons respectively. In those triumphant years of the three clubs, none of them lost a single top flight match at home.

Medeama have played 59 league home games in the last five seasons, winning 41 times and losing seven. In the 2015 and truncated 2018 seasons, the Tarkwa-based side were unbeaten on their turf.

It is imperative that the Mauve and Yellows win their home games in the upcoming season. To achieve this, scoring goals will be paramount.

A number of fans may be pessimistic about the attacking force of the side after the exits of Babil and Opoku Agyemang but there is some promise in the current lineup.

Apart from the return of Mohammed Abass, Medeama can rely on Ivorian striker Kalibo Toussaint for some extra firepower. There is also the presence of Ebenezer Ackahbi, a tricky 17-year-old attacker capable of creating and finishing off opportunities.

Medeama look ready ahead of the new campaign; an improved back line, a deep midfield and a good home record.

In this special town of Tarkwa where gold and manganese are in abundance, Samuel Boadu, Ghana’s Pep Guardiola, has the tools to write Medeama’s name in Ghana football folklore.