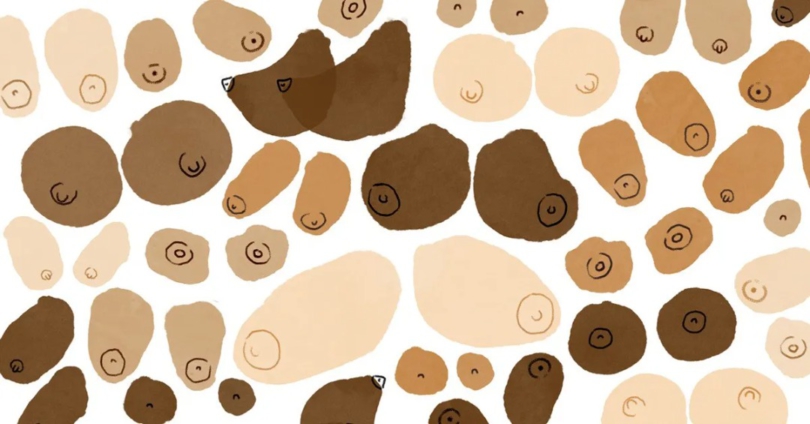 Female nipples come in all shapes, colors, and sizes; people of every gender have them.  Emily A. Klein(2019) a great science writer notes that for pregnant and lactating mothers, nipples can provide access to nourishment for a breastfeeding baby.

Additionally, the nipples are highly sensitive and responsive to stimulation, making nipple-sucking a great way to give and receive pleasure for folks of all genders.

One article by O. Team(2019) explained that with regards to the nipple it has two structures:  The nipple itself, which is a raised area with tiny holes that connect it to deeper tissues in the breast, and the areola, the relatively flat area of skin surrounding the nipple.

The nipple and areola are usually darker in color than the surrounding skin and have an irregular surface. Most people have two nipples, but it’s fairly common to have one or more extra nipples.

Why does nipple-sucking feel so good?

Nipples are made to be sucked on: During breastfeeding, tiny holes in the nipples allow milk to flow through ducts from milk-producing glands in the breast tissue. In response to a baby’s sucking, the pituitary gland of a breastfeeding parent releases the powerful hormone oxytocin, encouraging milk to flow and promoting bonding and caregiving behavior.

The O. Team(2019) article further explained that even in those who are not breastfeeding, sucking such nipples can stimulate the release of oxytocin, which also occurs during sexual arousal and orgasm.

They also held that oxytocin, which is also known as “the love hormone” has been found to reduce stress and increase sensations of trust and well-being. Because nipple sucking and oxytocin release are linked, nipple sucking may help to build feelings of closeness and intimacy with your partner. This is interesting for men to draw closer to their women by sucking their breasts.

As well as encouraging oxytocin to flow, the nipples are highly sensitive to touch and temperature and often become erect in response to sexual arousal. The nipples don’t have erectile tissue that fills with blood like the clitoris or penis; instead, they get hard due to the contraction (pulling together) of specialized muscles below the skin, similar to what happens when you get goosebumps(O. Team, 2019).

One study by Demirel et al. (2015) found that Nipple stimulation to induce labor is a safe and natural method of massaging nipples to release oxytocin, thereby increasing levels of the hormone that leads to labor. The study found that methodical nipple stimulation may be effective for starting contractions at full-term pregnancy, although there is limited research to prove its benefits. Another previous study(Chaudhry et al. 2011) found that 50% of the postpartum participants indicated they tried this or other non-medical ways to induce labor.

In pregnancy terms, when we say nipple stimulation, it means manually massaging the nipples, using a breast pump, or having another person (a nursing child or a partner) suck on the nipples to stimulate them. This works by increasing levels of the hormone oxytocin. Oxytocin is produced in a part of the brain called the hypothalamus and is secreted by the pituitary gland. Oxytocin stimulates the uterus to contract and begin labor. Oxytocin also increases the production of hormones called prostaglandins, which further increases contractions.

The synthetic version of oxytocin, Pitocin, is frequently administered to pregnant people to induce or help progress the labor process. The increase in oxytocin from nipple stimulation can cause contractions that may kick-start labor if the pregnant person’s body is prepared to give birth.

Demirel et al.(2015) study found that nipple stimulation appeared to shorten the length of labor and decrease the instances of cesarean sections. The study involved 390 pregnant participants and divided participants into three groups:

Despite inconclusive evidence, many healthcare providers recommend it as an option for their clients who are full-term. A recent study (Hodgson and Latka, 2020) used 350 registered midwives in British Columbia and Ontario, Canada, and found that 96% of those surveyed had advised clients to use nipple stimulation as a way of releasing the hormone oxytocin, and 80% believed nipple stimulation to be effective. Ninety-two percent of the respondents named labor augmentation as their reason for suggesting nipple stimulation.

One article by Heather Jones, (2022) provided this highlights the reasons medical workers recommend nipple stimulation especially when the woman gets to her time:

A recent study (Tahir and  Mastalgia, 2022) explained that a nipple orgasm may feel even more intense during mensuration. This is because the hormonal changes during menstruation can increase breast sensitivity and tenderness, which may heighten arousal. Additionally, when your nipples are stimulated, they shoot off sparks in the genital sensory cortex. This is the same area of the brain that’s aroused by vaginal or clitoral stimulation (Annamarya Scaccia, 2022).  Due to the nature of the nipples, Emily A. Klein’s (2019) article suggests that the pleasure some people feel when having their nipples sucked is the same as that of direct genital stimulation — some people have even reported that they can have an orgasm just from having their nipples played with.

Just in case you are interested in incorporating nipple-sucking into your repertoire — or if you’d like to expand on your technique — there are many ways to get creative and promote greater pleasure for your partner and yourself according to the O. Team.

Nipples come in a wide variety of shapes, sizes, and colors. They can be big, small, dark, pale, puffy, flat, or protruding (sticking out). Some people have inverted nipples—instead of protruding, their nipples are tucked inside the breast, appearing “inside-out.”

It can be helpful to pay attention to your partner’s unique anatomy: Some people have highly sensitive nipples and like a very gentle touch, while others prefer more intense sensations.

Those who have had breast or chest surgery, such as breast reduction or mastectomy (removal of the breast), sometimes experience a change in nipple sensitivity/ Particularly those who have experienced a medical procedure involving their nipples, chest, or breasts, make sure to check in about what nipple sucking means to them and how it feels.

Some people who are lactating (breastfeeding) experience changes in the way they perceive their breasts and nipples, as well as the way that they feel about nipple-sucking in a sexual context. If your partner is lactating, take some time to explore both of your feelings around nipple play.

When building a mutually enjoyable relationship, communication is key. Before you experiment with nipple play, ask about your partner’s preferences and boundaries.

Setting the mood, or creating a sexy and relaxing ambiance, can help to maximize pleasure. There are a variety of sensual elements that can heighten the mood, including dimmed lights or lit candles. You might also consider adding in some background music or wearing something that makes you feel confident. It can be a lot of fun to explore and experiment with the setting — though it often takes trial and error to optimize what feels best for you and your partner.

Switching up the intensity of nipple sucking can be a great way to discover what your partner likes, as well as keep things interesting. Start by sucking softly, then increase the level of suction or alternate between a firm and gentle. Keep in mind that what feels gentle to one person can be unbearably intense for someone else: Always check in with your partner to see whether what you’re doing feels good and whether they’d prefer you to back off or increase the intensity.

The tongue is perfectly built for bringing pleasure to your partner during nipple-sucking. You can make gentle circles around the areola with the tip of your tongue, use it to stimulate the nipple itself, or even lick the entire breast or pectoral area to increase anticipation. You can also play with the erect tip of the nipple with your tongue, circling or flicking it while you suck.

7. Tease with your teeth.

For some people, nipple-sucking feels even better when the teeth get (gently!) involved. Try softly raking your teeth from the base of the nipple to the tip. For those who prefer a little pain with their pleasure, nibbling and biting the nipples can feel amazing. Whenever you use your teeth, take great care to avoid biting too hard—and always ask for your partner’s feedback to make sure what you’re doing is more “Wow!” than “Ow!”

Nipple-sucking can be a great way to enhance sex, or a satisfying, intimate activity in its own right. Experiment with a variety of techniques to discover what feels best for you and your partner. If you’re new to nipple sucking (or even if you’re not) go slowly, check in often, and enjoy the experience.

From studies, I found that despite popular belief, stimulating your clitoris, vagina, or penis is not the only way to have an orgasm. Nipples are rich with a network of nerve endings, the tenderness of which varies from person to person and from day to day. Nipple play can also bring you to that big O. And there are so many ways you can stimulate your nipples to make that orgasm explosive. Experiment with techniques, find out what makes you feel good, and just have fun!

DISCLAIMER: The Views, Comments, Opinions, Contributions and Statements made by Readers and Contributors on this platform do not necessarily represent the views or policy of Multimedia Group Limited.
Tags:
Binding partners
Nipple sucking