Woman donates a kidney to her boss 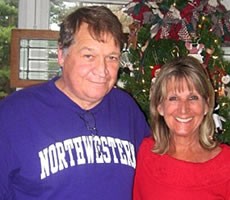 An Indiana woman who donated one of her kidneys to her former boss says she hopes it gives him many healthy years with his family.

Richmond residents Susan Preston and Bruce Dodds are both recovering from their December 7 surgeries at the IU Health University Hospital in Indianapolis, where Mr Dodds received one of Ms Preston’s kidneys.

Ms Preston and Mr Dodds became acquainted eight years ago when he became her boss at Earlham College in Richmond, where she’s an administrative assistant.

They each have three children and became grandparents at about the same time.
Mr Dodds and Ms Preston worked together for five years, until Dodds was hit by kidney failure caused by polycystic kidney disease — a genetic disorder that causes kidney cysts.

Three weeks after the surgery, Dodds told the Palladium-Item in Richmond, Indiana, that food tastes good again to him for the first time in three years, his fluid intake is no longer restricted and he’s finally free from dialysis.

‘Her gift means a normal life again,’ he said.
Mr Dodds and his wife have plans to resume the hiking and outdoor activities they enjoyed before his illness. And Mr Dodds also is looking forward to spending more time with his grandson and a new grandchild due in February.

‘I’m just glad I was able to help Grandpa Bruce,’ Ms Preston said.
Her husband, Roger Preston, said his wife is ‘a make-a-difference kind of person’ and her generous gift to Mr Dodds is in character with that.

‘It’s pretty amazing for someone not related to our family to make that gift,’ said Mr Dodds’ daughter, Lara Dodds.

She said her father was listed for three years as a transplant candidate on state and national databases and had one near match. All along, Ms Preston offered to be a donor — and she was found to be a match when she was finally tested.

‘My doctor said he must have been a really good boss,’ Preston said with a laugh.

Both families said their faith and prayers by friends, family and strangers helped them through the transplant process.

Mr Dodds’ life changed immediately because the kidneys filter waste and excess fluid from the blood and if they fail, the only options are dialysis or a transplant.

He said each dialysis treatment is as hard on the body as running a marathon and that body is operating at just 30 percent of its normal energy level.

Roger Preston, who works at Reid Hospital in Richmond, said there is a misconception that a person can handle dialysis indefinitely.
‘It’s a Band-Aid on a gaping wound,’ he said.

Mr Dodds’ family noticed his improvement as soon as he was wheeled into his room after surgery. Everyone said his color was better — pink where he had once been gray.

To prepare for the surgery and life afterward with one kidney each, Ms Preston and Mr Dodds went through extensive physical tests this year to make sure they were as healthy as possible.

Mr Dodds’ perseverance through the hardships inspired Ms Preston, who said her former boss had worked hard to take care of himself during his long illness.

‘I knew that I was giving it (the kidney) to someone who was doing his part to take care of it,’ she said.