Woman fakes pregnancy for nine months to stop partner from leaving her - MyJoyOnline.com 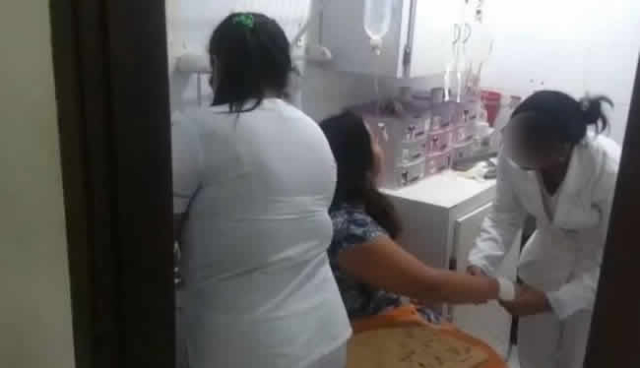 A 37-year-old woman from Colombia recently shocked her entire country after managing to fake her pregnancy for nine months and then coming up with film-worthy story to explain the absence of a baby on her due date. And she did it all to keep her partner from leaving her.

Antonela Santiago Padilla and her partner Victor had known each other since they were 14 year old teenagers growing up in northern Barranquilla. Life split them apart for a long time, but many years later, Victor called to commemorate the memory of her brother, who had passed away.

She started writing to him in September of last year, and soon their relationship became stronger and closer. However, Antonela knew that he was involved in a romantic relationship with another woman and didn’t want to break them up.

Victor kept telling her that he and his partner weren’t getting along and that they were going to break up, so they started their own romantic relationship in December 2017. But Antonela wasn’t convinced that Victor had forgotten about his former girlfriend and it was this insecurity that made her create this elaborate farce that left everyone flabbergasted.

“It was all fake, yes, I invented everything and I did it out of love, for fear that I would lose the person I cared about, fear that he would stay with her, that’s why I did it and I take full responsibility,” Antonela today told Colombian newspaper El Heraldo.

So what exactly did this woman do? Well, consumed by her fear that Victor was going to leave her and harrased by his former partner who claimed that it was Antonela who split them up, she started devising a plan to keep her partner by her side. The mother of two – a boy, 13, and a 14-year-old daughter – knew that Victor didn’t have any children of his own, and thought that if she could at least offer him the illusion that she was going to give him a baby, it would make their relationship stronger.

“One day, in January, I told him I was pregnant and he innocently believed me,” Antonela told reporters.

The man’s reaction to the news that he was finally going to be a father was such a joyous one that Antonela claims it started affecting her psychologically. The happiness in his eyes, his voice when he called her ‘mommy’, they all distorted reality to the point where, even though she knew she had made up the pregnancy, she started experiencing bizarre symptoms.

“Honestly, everything was like a psychological pregnancy and when that happens, your belly gets bigger, you start to feel things that you shouldn’t, like when he called me ‘mommy’, I felt the baby move,” Antonela claims. “I felt nauseous, I wanted to vomit, I felt dizzy, I had cravings, sometimes I wanted to eat mojarra and I bought it, everything was psychological.”

This is where the story gets weird. According to some sources, Antonela deceived her partner and everyone else by wearing a cushion under her clothes and stuffing it with rags to make it seem like it was growing.

“She had a belly, it was small, but it never raised suspicions. My son lived with her, they slept together. But he never touched her belly or tried to bond with the baby,” Victor’s mother said. “We never suspected anything because although her belly was small, some pregnant women don’t have big bellies so we didn’t think anything was strange.”

However, Antonela recently said that she never used a cushion or anything else meant to enhance her belly. She claims that it would have been impossible to fool her partner for so long. After all, they slept in the same bed, and he often touched her belly.

But she does admit to fooling both Victor and their two families by making false doctor’s appointments and even producing fake evidence of her pregnancy, like an ultrasound downloaded from the internet.

“When I had doctor’s appointments, they were in fact medical checkups like cytology or general medicine, not pregnancy checkups,” the 37-year-old woman admitted. “Victor often told me that he was going with me, but I always had some excuse to prevent him from going, I told him not to worry, that I was going with my sister and stuff like that.”

Somehow, this fake pregnancy farce worked for the whole nine months, and friends and family had already prepared a baby shower to celebrate the birth of Mariangel, as Victor called the unborn girl. But as her due date approached, Antonela started devising a plan to explain why there was no baby.

On the morning of September 22, Antonela Santiago Padilla left her home to meet her sister and buy a cradle, diapers and other things for little Mariangel. Later that day, she was scheduled to give birth. Only she never made her appointment, and would later claim that she was kidnapped by masked men who shoved her in a car and cut out her baby for organ harvesting. After being released by her captors, she called Victor to come get her, and when he asked what had happened to the baby, she told him it had been taken by organ traffickers.

Despite her refusal to got to the hospital to have this “backstreet c-section” checked out, Victor took her to the Nino Jesus de Soledad, and also notified the police about the crime. An operation to catch the alleged child traffickers was set in motion, and staff at the hospital scrambled to help the poor mother.

Everyone started to doubt Antonela’s story, after a hospital evaluation showed that she had suffered no cuts consistent with a forced caesarean. A blood test showed no traces of sedatives in her body, but also no evidence that she had ever been pregnant in the first place.

“The woman went around showing an ultrasound scan that she had taken form the internet, she simply modified it and deceived her sentimental partner. But at the hospital she took a test which showed she had never been pregnant,” police commander Mariano Cotero Coy told Al Dia.

Antonela kept insisting that she had been pregnant and that gang members had kidnapped her and cut her baby out of her belly, even though the evidence against her was overwhelming. However, in the interview published today by El Heraldo, she admits that she made up the part about the baby being removed from her womb, but insists that she really was kidnapped by gang members on September 22, and had all her money stolen.

After talking to doctors and police, Victor begged Antonela to tell him the truth, and she couldn’t keep lying anymore.

“He begged me to tell him the truth, to tell him if it was true, and I wasn’t able to look him in the eyes, it hurt me to see him like that, ” the teary-eyed woman told El Heraldo. “When I got home, I told him everything. I told him what I did, I talked about my insecurity, my fears, my love, we cried together. He said to me ‘I feel mocked, like a clown, why did you play with my feelings ? If you were not pregnant, I was not going to leave you, because I love you.'”

Antonela admits that Victor feels hurt by what she did, and that he told her to give him some space to recover from the recent shock, but she claims that they are still together and talk daily. The woman is currently seeing a psychologist to deal with the aftermath of the farce she kept up for so long.

Faking pregnancies appears to be very popular these days. Only last month we wrote about a young girl who also managed to fool her boyfriend that she was pregnant for nine months, only to then tell him that the bay had died at birth.