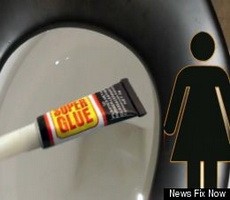 A woman literally got caught in a sticky situation inside a Walmart bathroom in Kentucky.

She sat down on the toilet and couldn’t get up for 60 minutes.

The unidentified woman was using the restroom in the Monticello store earlier this month when she found that she was glued to the seat, the New York Daily News reported.

Paramedics were called to the scene of the grime after someone heard the woman screaming from the toilet stall. They needed an hour to remove her from the toilet — with the toilet seat still attached to her buttocks, according to AzCentral.com.

The seat was removed from the lady’s posterior in a hospital emergency room.
Officials suspect the gluing may have been done on purpose, but don’t want to accuse anyone at this point, according to Lex18.com.

This isn’t the first time someone was glued to a toilet seat at Walmart. The same thing happened on March 31 to a man in Maryland, the Kentucky Post reported.

Meanwhile, putting Super Glue on a toilet is considered a crime, and Lt. Matthew Donnelly of the Elkton Police Department in Kentucky told the paper that the perpetrator could face second-degree assault charges.