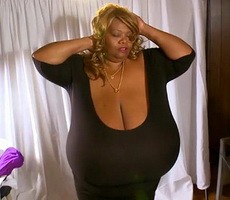 Annie Hawkins-Turner is used to people being unable to look her in the eye — as she boasts the world’s largest natural breasts.

Annie, originally from from Atlanta, Georgia, is known worldwide for her raunchy videos and gets plenty of attention in person as well.

Her sister Vernadine reveals: “When we go out, someone always wants to hook up with Annie!”

Her huge bust is the result of rare medical condition gigantomastia, which will cause her breasts to continue to grow throughout her life.

She started to wear a bra when she was just TEN years old, and says she was bullied by other children at school.

And even now, her outsize chest causes her problems, suffering from pain and numbness in her shoulders and back if she stands for too long.

But despite the issues, Annie says she has never considered having her bust reduced, explaining: “Why fix something that’s not broken?”

Annie caused a stir last year when she was interviewed by Phillip Schofield and Jenni Falconer on Britain’s This Morning.

And she is now returning to screens – appearing in US documentary series Strange Sex.